Comptroller Uche Ngozi of the Ondo/Ekiti Area Command of the Nigeria Customs Service (NCS) on Wednesday disclosed that the command exported 2,233 containers of cocoa beans from January to August, 2021. 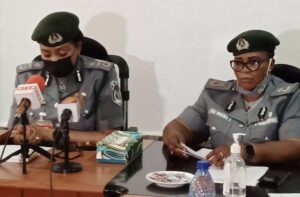 Ngozi made the disclosure during a working visit of the Zonal Coordinator of NCS, Zone A, ACG Modupe Aremu, in Akure.

According to Ngozi, the command is an off-dock area, having neither seaport, international airport nor borders.

Concerning revenue, she said it was generated from interventions through appraisal of Demand Notice (DN) on vehicles with duty infringement, collection of duty from parcel post and excise and supervision of coco exportation.

“On assumption in office, I made it a duty to pay courtesy visit to all sister agencies in Ondo and Ekiti state respectively.

Ngozi noted that three infant factories emerged as one and had just gotten their Cooperate Affairs Commission approval and was advised on how to apply to NCS to enable them obtain their excise license.

In another development at the Oyo/Osun Area Command, Comptroller Adamu Abdulkadir said that the command generated N23 billion from January to August.

“The command generated N10 billion in June, the highest in the command, had 169 seizures and 13 suspects.

“As regards achieving its target, the command enhanced its strategies, set up task force on excise PMS and mining to ensure all loop holes are closed,” he said.

In her response, Aremu pointed out that she was not surprised at what was got from Ado Ekiti because she believed in the capable hand of the CAC in charge.

“I know that you do not have a revenue target but of the interventions from vehicle on the road. The amount realised was quite remarkable and I believe the command can do better as the ember months approaches.

“Shortage of officers is everywhere but with the recruitment done soon, officers will be deployed effectively to commands to boost staff strength,” she said.

At Ogun/Osun, she noted that the excise dragnet would be expanded and urged the controller to do census to get factories that need to be licensed.

She commended Abdulkadir on his revenue of over N10 billion, adding that the service was not expecting less from him due to his antecedent.

“As regards suspects, there is need to ensure that the case files are well documented and compiled for proper prosecution,” she said.