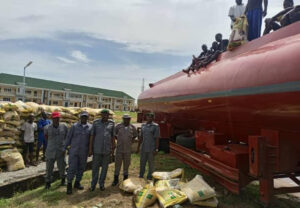 This is contained in a statement by the Spokesman of the Command, Mr Umar Abdullahi on Monday in Bauchi.

He listed the seized items to include 542 bags of 50 kilogrammes of foreign parboiled rice, four sacks containing 165kg of pangolin shells, 487 bags of Urea brand of fertilisers and 250 cartons of pasta.

He said that operatives of the Command also impounded seven vehicles used in conveying the prohibited items. 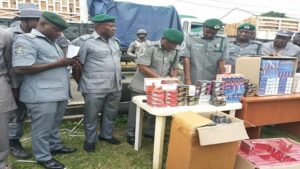 “The seizure is in line with provisions of Section 8 and Section 158 (Power to Patrol Freely) of Customs and Excise Management Act (CEMA) Cap. C45 Laws of the Federation of Nigeria 2004, as amended.

Read Also:  SERVICOM: NIMASA DG Celebrates Stakeholders, Says There Will Be No NIMASA Without You

“The unprecedented seizure within this short time was achieved as a result of sharing of information, intelligence gathering and doggedness of the officers and men of the unit in making the zone unbearable for smugglers.

“People have to know that eradicating smuggling in this country will boost the economy which will make the government provide social amenities to the citizenry,” he said.

The spokesman urged the people to provide credible information that would aid eradicate the menace.

The statement quoted the the Head, FOU Zone “D”, Comptroller, Musa Ibrahim-Jalo as reiterating commitment to rid the zone of smuggling.