The Nigeria Customs Services (NCS), Kebbi Area Command has seized 478 jerry cans containing 11,950 litres of Premium Motor Spirit (PMS) or petrol that were about to be smuggled out of Nigeria. 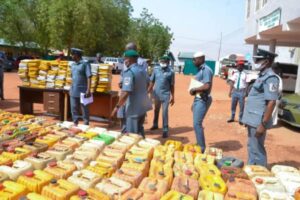 Nasiru Manga, spokesperson of the command stated this in a statement he issued to newsmen on Monday in Birnin Kebbi.

“The anti- smuggling operatives of the service have continued to give petroleum smugglers a tough time as the command’s anti-bunkering team.

‘They seized 478 jerrycans of 25 litres totaling 11,950 liters intended to be smuggled out of the country through Yauri waterway on Thursday.

“Based on a tip off, the intelligence operatives had monitored the movement of the loaded jerrycans of PMS to a spot near the water way for some days before the deployment of the anti-bunkering squad.

“The squad struck and intercepted the products and evacuated the same to the command’s headquarters in Birnin Kebbi,” Manga added.

Commenting on the development, Mr Joseph Attah, the Customs Area Controller of the command lauded the collaboration of relevant units under the command.

He stressed the need for security agencies to share information and work together in order to achieve results in the interest of the nation.

Attah reiterated the command’s resolve to strictly monitor all the waterways under the command, especially this rainy season.

This, he said, is to curb smuggling of contraband that could compromise national security and the economy.

Attah called on the border communities to give relevant information that could help curtail smuggling activities in the state.

“The renewed offensive on smugglers in the last two weeks has seen the command making a number of seizures of PMS, second hand clothes, used vehicles and fertilisers, among others,’’ he said.