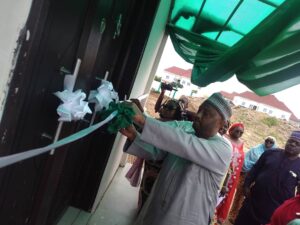 During the inauguration, the Director-General of the organisation, Malam Faruk Salim, said the center will train individuals and companies on certified halal goods before exporting them to other countries.

According to him, “the aim of establishing the center is to train business entrepreneurs across the northern region and the country at large in modern techniques of standardisation of products.

“This will boost the incomes coming into the state in terms of tax, hotel bills and transportation of individuals as well as companies coming to the centre.

“It is not a religious institution; rather it is a business place where products are certified.

“The certification does not involve Kano products only; rather, products across the country will also be certified and improve Nigerian-made products.”

Salim further said that the organisation was working with the Federal Executive Council (FEC) to enable them to build up the centre in time.

The DG also said the organisation had trained 78 newly recruited staffers on rules and regulations of its to achieve set objectives.

“Every organisation make sure its train its members of staff to enable them know the dos and don’ts,” he said.