Customs Strike Force Zone A Collects Over N3bn In 11 Months 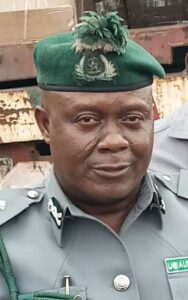 Shuaibu said, at a news conference in Lagos on Wednesday, that the feat was achieved through meticulous documentary checks by the Information and Communication Technology (ICT) unit.

The review period was shortly after the coordinator took over the mantle of leadership of the team to combat smuggling within the South-West zone.

Shuaibu added that the team had also intercepted smuggled goods with a Duty Paid Value of N643, 727, 837 in the past six weeks.

He noted that through concerted efforts of its officers, some goods positioned for export, in contravention of the export prohibition guidelines, were intercepted.

He said the export prohibition guidelines were in tandem with the Federal Government’s policies for the protection of endangered species, protection of the local economy and promotion of the national forest.

He noted that these policies were aimed at assisting the nation’s sustainable management of its vast forest against deforestation.

According to him, the narratives have to change as the team has beamed its search light on export prohibitions infractions.

“The CGC Strike Force Zone A is composed of two units, the ICT and operations and from the ICT angle; we have young officers who are talented, determined, focused and nationalistic.

“These officers that are patriotic have contributed their own quota to the nation’s development by raking into the coffers of government an amount in excess of N3 billion naira.

“Likewise the operations section of team A, has made monumental seizures, one of which had brought the CGC down to Lagos.

“This particular briefing is christened ‘Super Bumper Harvest’ because there is much to show in an attempt to showcase the irregularities in export prohibition,” he said.

He listed 1,372 bags of foreign parboiled rice, 50kg each; 5×20 feet containers of unprocessed logs of wood and 2×40feet (12,500 pieces) containers of donkey hides and skin as the seized items.

He said the 1372 bags of 50kg foreign rice were not evacuated from anywhere but seized from the creeks bounding the entire south west and brought to the command devoid of any casualties and scandals.

He noted that every country had its rules and regulations, appealing to Nigerians to be on the same page with government to enforce the fiscal policy of government.

“Smuggling of foreign parboiled rice should be discontinued, and by patronising rice farmers in Nigeria, we are turning the economy around, putting money in the hands of our farmers and they will get the real full value for their efforts.

“For the donkey skins, if we allow this to continue, we will wake up one day to find out that all these endangered species have disappeared and it is part of our responsibility to ensure that they are protected.

“Unprocessed wood and its derivatives are banned for exportation and the charcoal seized was evacuated from a warehouse close to Apapa at the point of export, and so it’s obvious that it was not meant for local consumption,” he said.

Shuaibu noted that patronising the country’s shoe industries in Aba, Onitsha and even Lagos would make the moribund industries to come alive and thus be a source of employment for the youth.

He pleaded with importers and exporters to be compliant with extant laws and make honest declaration, and warned recalcitrant ones that his officers were prepared to face saboteurs headlong.