The Zonal Cordinator, Nigeria Customs Service (NCS), Zone A, ACG Modupe Aremu on Tuesday said that 50 border patrol boats would be deployed to fight smuggling on the waterways. 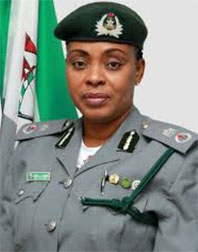 Aremu, who disclosed this during a working visit at the Western Marine Command (WMC) of customs, said that 520 marine custom officers would also be deployed to the command.

According to her, the boats and officers are being deployed to ensure that the waterways are secured effectively.

“The Comptroller General of Customs is aware that commands are short of officers and due to the ongoing recruitment, soon, officers will be trained for deployment to commands,” she said.

Aremu also called for collaboration in the fight against illicit drugs and said that more results would be achieved with intelligence gathering.

Apart from WMC, she also visited the Kirikiri Light Terminal (KLT) and the Lagos Industrial command.

At the KLT, Aremu emphasised on proper examination, which she noted should be precise and detailed.

Aremu urged the officers to always be conscious of their health and to do regular check-ups to ensure that they are fit at all times.

The Ag. Controller of the WMC, Deputy Comptroller Enonche Ochiba, said that the command had a good working relationship with the Nigerian Navy, which always responded when called upon to assist.

He said that officers in the command had some challenges in terms of logistics and accommodation.

Comptroller Hammi Swomen of the KLT, on his part, said that the command had to work hard to secure cargo volume, as they had bad roads to contend with.

He also said that the command did not have a premises of its own, as they were staying on the Nigerian Ports Authority’s premises, and urged the ACG to look into it.

At the Lagos Industrial command, Comptroller Monica Shaahu said that they had 55 new factories undergoing documentation under excise control.

She said that the command was charged with the responsibility of collecting excise duty, of which they had generated N9 billion.

Shaahu also noted shortage of staff and lack of adequate patrol vehicles as challenges faced by the command.