A Coalition of Northern Groups has called on the Nigeria Customs Service (NCS), to compensate the families of the victims of the recent accident involving their vehicle in Jibia Local Government Area of Katsina State. 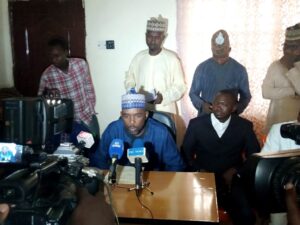 Jamilu Charanchi, the Chairman of the coalition in Katsina State, made the call on Thursday, in Katsina while briefing newsmen on the incident.

Charanchi, who said that financial compensation should be paid to the families of the deceased with immediate effect, added that a letter had already been written to the Comptroller General, Rtd. Col. Hamid Ali to that effect.

The Controller of the NCS in Katsina, Mr Dalhatu Chedi, had on Monday confirmed that some of their operatives of ‘border drill’ lost control while on their way to get food, causing the death of five persons.

“We address this letter to you with a deep sense of patriotism and strong concern for the lives of our people lost almost on a daily basis as a result of actions of customs officers on patrol in Katsina and other border communities of northern Nigeria.

“Putting aside fine phrases, the coalition, Katsina State Chapter, specifically refers to the recent unfortunate incident of the killing of 10 and injuring several of our people, by reckless Customs personnel in pursuit of a suspected smuggler in Jibia.

“We address you Sir, consciously believing that as the Head of the Customs’ service, you will accept and treat this as a warning from history which repeats itself, according to Karl Marx, once as a farce and twice a tragedy.”

“The reckless behavior of the Customs personnel, if not addressed decisively will result in a breakdown of law and order which may consume more lives.

“The victims are from poor family backgrounds, hence the need to come to the aid of their families, in order to calm nerves in the town”, the Group said.

This is not the first time of having similar issues with the service, hence, the need to also investigate this matter urgently, to avert future occurrences of these extra-judicial killings of innocent Nigerians.

The quick intervention of some notable people for the victims to have access to special medical attention played a vital role in not only saving the lives of the victims, but also stopping the escalation of the crisis.

We, therefore, call for the immediate suspension of the activities of ‘border drill’ across the state, and for the NCS to continue taking care of the injured victims until they recover, the Group further said.

Similarly, they urged the NCS to continue to assist the families of the victims, considering the fact that they cannot engage in any economic activity.