The Western Marine Command (WMC) of the Nigeria Customs Service has intercepted 32 sacks of Cannabis Sativa worth N190m, and 828 bags of rice amongst other contraband concealed in wooden boats along the South Western waterways and creeks. 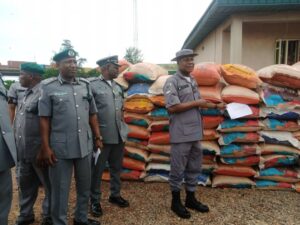 Controller in charge of the command, Comptroller Abubakar Umar, while showcasing the seized items at a press briefing in Lagos on Thursday, said the contraband were intercepted by operatives of the command between February and May 2022 with a total Duty Paid Value of about N190.45million

Umar noted that the feat recorded was made possible due to the commitment of officers and men of the command, effective use of intelligence, information gathering, surveillance operations, inter-agency collaboration and intensive patrol of the creeks and waterways by the operatives of the command.

He also assured that the command would continue to engage the traditional and community leaders to address smuggling activities in their axis as well as engage in intensive patrol and surveillance of the waterways to send smugglers out of business. 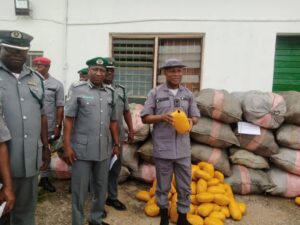 According to Umar, the operatives of the command intercepted the item on March 30 at about 3.30 p.m. on a boat at Oko-Aja beach.

He added that the goods were brought to the WMC and upon physical examination; it was found out that there were 32 sacks, that is 2,520 pieces of cannabis sativa weighing 1,437kg.

“Since my assumption of duty in the command as the Area Controller on Feb. 21, I have together with my officers and men ensured that no stone is left unturned in achieving my mandate and that of the command.

“This is to ensure that smuggling is nipped in the bud along the South Western Waterways and creeks, which is the jurisdiction of the Command.

“This is a case of absolute prohibition and contravenes Section 24(b) of CEMA Cap C45 LFN 2004 as amended,” he said.

He said with the approval of the Comptroller General of Customs, the seized cannabis sativa would be handed over to the Commander, Marine Unit of the National Drug Law Enforcement Agency (NDLEA).

He pointed out that it was part of the existing inter-agency collaboration between the NCS and the NDLEA.

Umar said on April 7 at about 7.30 p.m., operatives of the command, along Badagry waterways, intercepted and seized one wooden boat laden with foreign parboiled rice suspected to be smuggled from Benin Republic.

“The smuggled foreign rice and its means of conveyance were brought to the command for examination. On physical examination it was found to be 503 bags of foreign parboiled rice.

“In a related development, on May 25, at about 7.00 p.m., the command also intercepted and arrested two wooden boats laden with foreign parboiled rice at Oniru Beach.

“The boats and the smuggled foreign rice were counted and found to be 136 bags of foreign parboiled rice,” he said.

The controller said during the review period, 828 bags of smuggled parboiled rice from Benin Republic with a Duty Paid Value of N29, 684,000 were seized by the operatives of the command.

Similarly, he said the operatives at different locations in Idiroko, Badagry, Bar-Beach and Sea side intercepted different smuggled items, which contravened Sections 46(c), 167 and 169 of CEMA Cap C45 LFN 2004 as amended.

Others are: 250 sachets of pepper onion tomato, 71 pairs of second hand shoes, 10 sacks of second hand clothings, four boats and two engines as means of conveyance, all with DPV of N190, 145,500.

He added that the PMS seized, due to its nature, was auctioned by the Command with the approval of headquarters, and that the amount generated had been remitted to the federation accounts.

He said the action of the operatives was in line with the Provisions of Section 149 (Powers to search vehicles/ships and Section 158 (Power to Patrol Freely) of Customs and Excise Management Act (CEMA) Cap C45 Laws of the Federation of Nigeria 2004 as amended.

He said unfortunately, no arrest was made in connection with these seizures as the smugglers dived into the waters while some took to their heels on sighting the patrol officers/men.

The controller said the seizures were made possible due to the commitment of officers, effective use of intelligence, information gathering, surveillance operations, inter-agency collaboration and intensive patrol of the creeks/waterways.

“Despite successes, we are poised to strengthening the existing collaboration between the command and other sister agencies to achieve greater efficiency and curb the menace of smuggling along the South Western waterways and creeks.

“Smugglers and would-be smugglers are urged to abandon their unlawful trade as the command will soon catch up with them and their illegal wares, with a view to arresting and prosecuting them.

“It is better for them to turn a new leaf and embrace legitimate trade, so that they can also contribute their quota to the Gross Domestic Product of the Nigerian economy.