The Federal Operations Unit Zone ‘B’ of the Nigeria Customs Service (NCS) says it has seized 122 Sacks of foreign smuggled broken bones and horns, other goods, worth N121.4 million in the month of August. 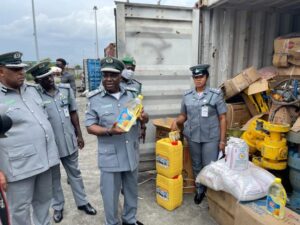 The Comptroller of the Zone, Mr Al-Bashir Hamisu, stated this on Thursday, while briefing journalists on the achievements recorded by the zone in August.

He explained that the unit made 75 seizures between Aug.3 – 25, 2021, that included 393, 900 capsules of unregistered pharmaceuticals, 615 bags of foreign parboiled rice of different sizes ranging from 10kg bags to 100kg bags.

The Comptroller added that over 500 cartons of unregistered pharmaceutical products also seized by the unit were handed over to NAFDAC for further control, during the same period.

He described the handing over as the result of inter-agency collaboration, noting that all the seizures were carried out in states under the zone’s operational area that covers Kwara, Niger, Kaduna, Jigawa, Kano, Katsina, kebbi, Sokoto , Zamfara and the FCT.

According to him, some of the items seized were kept at the nearest location, while some that could be moved were taken to the Customs’ Kaduna office .

He reiterated the unit’s commitment to the discharge of its duty, while urging smugglers to seek alternative legitimate businesses.