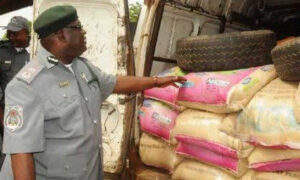 The Strike Force Coordinator, Deputy Controller Aliyu Olorokoba, made the disclosure in a statement made available to newsmen on Friday in Kaduna.

According to him, the items seized were 185 bags of 50kg foreign rice, with DPV of N8.75 million and 25 bales of second-hand clothing, valued N3.52 million.

“While 496 sachets of illicit drugs (Tramadol and Diclofenac) with duty paid value of N436,400 were also seized.”

According to him, the seizures were in response to the matching order given by the Controller General of Customs (CGC), Col. Hameed Ali, to the team.

Olorokoba appreciated the CGC for providing logistics to the officers and men of the service to carry out their statutory functions.

He explained that the team was able to strike on smugglers in the axis, because of credible information it received from patriotic Nigerians.

The coordinator reiterated the commitment of the team to track down all smugglers until they embrace legal businesses.

He therefore advised those involved in the illegal business to engage in lawful economic activities such as farming.

Olorokoba urged patriotic Nigerians not to relent in exposing smugglers in their midst in order to protect the national economy.