Cyprus is calling for increased naval cooperation and permission for onboard security to combat the scourge of maritime piracy, following an increase in attacks in the Gulf of Guinea. 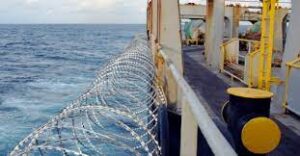 Six crew from a Greek-owned containership were abducted on Monday near a similar recent kidnapping incident.

The 5,500 teu Tonsberg, run by Technomar Shipping, was en route from Cameroon to Benin Republic, one of the world’s hot spots for piracy and armed robbery over the last decade.

This 6,000km long coastline, stretching from Senegal to Angola, has become a magnet for pirates, with 95% of kidnappings around the world in the first nine months of 2020, involving 80 crewmembers in 14 attacks, taking place off Nigeria, Benin, Gabon, Equatorial Guinea and Ghana.

“Piracy constitutes one of the black marks and a scourge for commercial ships, particularly in areas where there is flare-up and is a matter which is of concern for the international shipping community for a long time,” Demetriades told the Cyprus News Agency.

He said that Cyprus was “one of the first states to draft a legislative framework allowing for the presence of armed guards onboard vessels to protect both seafarers and cargo.”

The Minister added that it is necessary for the world maritime community to have the closest possible cooperation with the countries near where piracy takes place.

“There should be an increased presence of forces in these areas acting in a preventive manner against piracy as much as possible, a closer cooperation with the governments of countries where the phenomenon is observed” and of course, vessels should also take their steps.

In earlier comments to the Financial Mirror, the Cyprus Shipping Chamber had called for the international community to engage more actively to combat piracy off the Gulf of Guinea.

The best way would be for governments to enhance their naval presence in the area, as some countries, such as Nigeria, do not allow anchorage to vessels with armed onboard security.

The CSC, whose members employ about 60,000 onboard their vessels worldwide, said the situation remains “gravely dangerous” for ships trading in the area and for the seafarers.

The sea basin is of geopolitical and geo-economic importance for transporting goods to and from central and southern Africa.

It is a choke point for the African energy trade, with intensive oil extraction in Nigeria’s Niger Delta.

“Any other route would take longer and exert additional strain on shipping companies, as well as seafarers who are already having trouble coping with the COVID restrictions around the world,” said Chrysostomos Efthymiou, a Marine Officer at the CSC.

“This is why we welcome the different projects undertaken by key players such as Nigeria that have stepped up state services and taken control of the country’s maritime security.”

Tags: Piracy In Gulf Of Guinea