Classification society Bureau Veritas has issued design approval for what will be “the world’s largest” very large gas carriers (VLGCs). 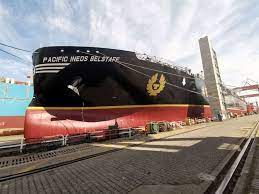 The ‘Panda 93P’ VLGC design has been developed by Jiangnan Shipyard, a Chinese gas carrier builder that is part of China State Shipbuilding Corporation (CSSC).

Sinogas, a Singapore-based gas shipowner has placed a firm order for two of the 93,000 cubic metre (cbm) VLGCs, with options for three more vessels.

Once delivered, these ships will be the largest VLGCs in the world and they will be powered by liquefied petroleum gas.

The delivery of these gas carriers, principally dedicated to the carriage of LPG, is scheduled for the first half of 2023 and will mark a further technological leap for Jiangnan in its development of new gas carrier concepts in long-term collaboration with Bureau Veritas. The Sinogas order has been described as a significant milestone for both shipyard and class society on the journey to a decarbonized industry.

Once in operation, the new design will reduce CO2 emissions by approximately 32% in comparison with the previous generation of 84,000 cbm VLGCs powered by low-sulfur fuel oil (LSFO). This reduction reflects the highly optimized design and economies of scale, as well as the use of LPG as fuel.

He believes gas as fuel will be a reliable pathway to bridge the emission gap. According to Hu Keyi, Jiangnan aims to offer “initiative green solutions”, as opposed to “passive green” based on existing technology.

This achievement has been realized by the Jiangnan team’s use of computational fluid dynamics (CFD) for hull line optimization. Jiangnan also adopted smart shipbuilding techniques with the use of digital technology, 3D digital mock-ups, 3D model submission and production planning, erection simulation and lifecycle management.

Read Also:  Maersk To Speed Up e-fuel Development With Latest Investment In US Startup

“As the strategy of forthcoming transition in marine industry, Jiangnan has positioned itself to establish a multiple party program focused on a fully circular approach to the management of gas-fuelled green ships. Definitely, we will invite Bureau Veritas’ involvement in this program,” Hu continued.

“We think the future maritime industry will be dependent on momentum for continued innovation through increased studies of disruptive technologies and non-traditional materials. Decarbonization is not only the responsibility of shipbuilding and shipping, it will need collaboration across the value chain. More stakeholders need to be involved.”

“This new generation of VLGCs establishes a significant milestone towards decarbonization. At BV, we are now more than ever committed to helping in the reduction of our industry’s environmental impact, as well as supporting our stakeholders through their unique sustainability journey,” Alex Gregg-Smith, Senior Vice President & Chief Executive, North Asia & China, at Bureau Veritas Marine & Offshore, said.