Home » Determine The Sex Of Your Baby Right On Your Bed!

Many people desire either a male or a female child, for one reason or the other. They are ready to spend fortunes to achieve their heart desires by seeking for assistance from specialists to make their dreams come true. But there is a method of determining the sex of our babies that is based on some understandings of our body that have some degrees of accuracies. And this method has around for quite some time now. 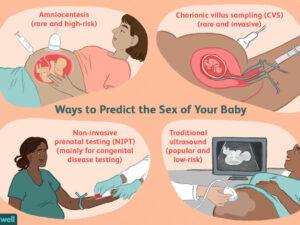 To start with, human cells most often contain 23 pairs of chromosomes with a set of 23 pairs from the father and the other from the mother. Twenty-two out of the twenty-three pairs are called autosomes while the twenty-third pair is the sex chromosomes. The sex chromosomes determine the sex of the baby, so, understanding their behaviours and understanding ovulation can help couples to determine the sex of their babies.

The Y chromosome has a ‘male-determining gene,’ called the SRY gene that facilitates the formation of testes in the embryo and results in the development of all-male sex organs. So, when the SRY gene is absent or mutated, only female babies can be formed. The Y chromosome, of all the men alive today, is traceable to a hypothetical single male ancestor who likely lived around 300,000 years ago.

It is expedient now, to state that this method, being discussed, was developed by Landrum B Shettles. However, recent researches have negated many of his claims but many people still have successes using it. His assumptions are that the sperm carrying Y chromosomes are shorter-living, smaller and faster-swimming than those carrying the X chromosomes.

But, before going further, we need to understand the term ‘ovulation.’ It is part of the menstrual cycle of a woman.

It occurs when an egg is released from the ovary. In all women, it occurs four days before or four days after the midpoint of the menstrual cycle. Ovulation is usually heralded, in some women, by a small increase in vaginal discharge which often becomes clearer and more elastic and with a raw egg white-like appearance. Some of the signs of ovulation include tender breasts, increased sexual drive, light vaginal bleeding or spotting and one-sided abdominal discomfort or pain.

There are ways women can fairly determine their ‘fertile period,’ which is roughly about a week in a month. Also, after release, an egg is capable of surviving for 12 to 48 hours before it disintegrates.

Also, in most instances, the sperms can survive for between three and five days before it dies. So, the question now is, how can we use all these information to determine the sex of the baby?

Since the sperm bearing Y-chromosomes die faster than the X-chromosomes, it means, if a baby boy is desired, intercourse should be confined strictly to around the immediate days after ovulation, But, if it is a baby girl, then the further away from the day of ovulation the greater the chances of the child being a female, in so far, intercourse occurs within the window that the egg and sperms are still viable for fertilisation.

Shettles also claimed that the ideal position to conceive a boy, is the one that allows the sperm to be deposited as close to the cervix as possible. This is when the woman is entered from behind, because this allows for the deepest penetration.

Read Also:  82 % Of People With Hypertension Live In Low-Income Countries – WHO

While the position that allows for shallow penetration, like the missionary position is the one that facilitates the conceiving of a female child.

He also stated that the sperm carrying Y-chromosomes survived under alkaline conditions whereas, the X-bearing chromosome prefers the acidic environment. According to him, douching and the woman reaching orgasm first are ways of alkalifying the vaginal environment. So, these should be avoided, if it is a baby girl that is desired.

In conclusion, many people have reported that this method helped them to determine the sex of their babies with great accuracy. But the warning here is that many of these assertions have been refuted by some scientists.

As of today, the only well-assured way of selecting the sex of babies is through pre-implantation genetic diagnosis, a test sometimes performed as part of in vitro fertilisation cycles. But there is no crime in going the Shettles’ way as well. Good luck!

Tags: Determine The Sex Of Your Baby