Home » Different Parts Of Ship And Their Functions (2)

Different Parts Of Ship And Their Functions (2) 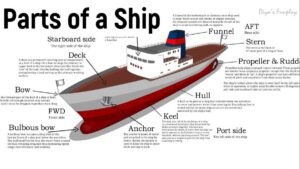 A deck is a floor or covering to the ship’s hull structure. A ship can have different decks at different section or parts of ship; namely upper and lower deck or deck 1, deck 2 and deck 3 in a sequential downward way. What it means is that; the topmost deck exposed to weather is called main deck or weather deck.

The levels and floors below weather deck is called deck 1, while one below deck 1 is called deck 2 and so on. On other hand decks or floors that does not extends from aft to forward are generally called as level.

Based on the position and level a ship’s deck can be divided into six main types; main deck, poop deck, upper deck, lower deck, weather deck and Foredeck. The main deck on the ship which run through its entire length is called main deck.

Function: One of many parts of ship; a deck is the plane that holds the hull structure providing different celling floor to the ship. The other job it do is to provide space and floor for the equipment and people to stand and work while protecting them from outside weather.

A hull is that part of ship that extends below the waterline to cover and protect water from getting in. You can consider it as the shell which protects the inside treasures from outside environment.

Everything that is stored and situated within the main ship structure is covered and protected by the ship’s hull. It includes the key parts of the ship such as bow, deck, the bottom keel and the both sides of the ship.

They are made up of series of plates jointed together called stakes along with other structural member such as plating and stiffeners.

A stiffener consists of structural parts such as longitudinal and transverse frames, bulkhead stiffness, girders and beam. While ships plating consists mainly of deck platting along with bottom, bulkhead and side platting.

Ship’s hull is designed as such to offer minimum resistance to water, is feasible and economical to construct without losing on much needed cargo space. One can easily calculate and improve the overall efficiency of a ship calculating and reducing hull’s resistance to ships motion.

Function: Made of steel the key role of ship’s hull is to maintain its water tight integrity and reduce water drag. And so hull plays a major role in determining overall efficiency of a ship.

Ship’s hull are thus coated with special paints that not only reduce frictional drag but also avoid marine growth which further increase the resistance to ships motion. Thus ships hull are cleaned and repainted with special coating during dry dock operation.

A keel is a part of ships hull that is responsible for providing strength to the ships structure; spreading stress and load equally along its longitudinal sides.

Due to its this property to hold and support ship structure it is often termed as the backbone of the ship. In simple terms it provide stability to a ship and increase its effective speed. The introduction of keel in shipping reduce much of the work regarding stabilizing ship structure

It was first known to be used by vikings to reduce lateral movement of their boats at the time. A keel is nothing but a thick plate that runs longitudinal across the ship from stern to stern; passing through the centerline of ships bottom structure.

There are three main types of keels used in marine industry; flat keel, duct keel and bar keel. A flat keel is used in all major ships in operation; bar keels are used when the ship has to work in shallow water while duct keels are preferred for offshore vessels and double hull tankers.

Function: Being one of the key parts of ship; it helps stabilize and support ship structure. It also plays an important role increasing the effective speed of a ship. With displacement of ship dependent upon the depth of keel from water line; it is helpful to measure draft and reserve buoyancy of ship.

A freeboard stands for the part of ships hull located above the waterline. It is the distance between the upper deck of ship and the point of waterline. The freeboard of a ship is not fixed but rather depends on the amount of cargo it carries.

This puts a cap on the amount of cargo a ship can load. By law it is required by ships to load only up to the load line marking for the designated water type. Thus it is a must for ships to have proper load line marking amidships on either side of the ships hull.

Function: The role of freeboard among different parts of ship is to maintain ships stability and avoid it from sinking. Under ICLL 1996 ( International convention on load line ) following load line marking are put on ships hull; Tropical Freshwater, Freshwater, Tropical, Summer, Winter and Winter North Atlantic. These load lines ensure that the ship have minimum sufficient freeboard at all times for safe voyage.

If you ask a mariner about engine room the first thing he might tell; its hot, noisy and full of vibration. The average temperature of engine room is always above 45 degree centigrade.

All the machinery in engine room is well segregated across different places on three different decks named utility deck, weather deck and machinery deck. With all the propulsion and auxiliary machinery installed in place it is also called as the heart of the ship.

All the machinery in engine can be controlled from a control room called Engine control Room or ECR in short. It is the only place in engine room where you will get relief from hot temperature and much of the noise.