Home » Different Parts Of Ship And Their Functions (3) 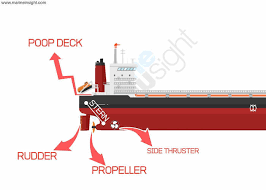 A funnel is what from which the exhaust gases are released into atmosphere. You can consider it as the chimney of the ship. Since the introduction of mechanized ship; it has been an integral part of the ships structure.

The cross section or width of these funnel largely depends on the amount of exhaust engine room produce. In early days of shipping it was used to release everything that the ship emits; but nowadays it is used within the limits of controlled emission with shoot collection in place to reduce pollution.

All the shoot that is collected in the shoot collection tank is then later discharged to the port authorities. If not possible they are discharged overboard via an eductor recording the time and amount in garbage record book.

If you look up-close carefully; will find that these funnels are in fact not that straight but inclined to an angle. This is done deliberately to assist the flow of flue gas away from the navigation bridge and ships deck.

Function: Being one of the parts of ship the function of a funnel is to safely release exhaust gas produced in engine room to the outside atmosphere. Together with the forward motion of the ship and funnel inclination towards the aft; exhaust gas is easily moved away from ship avoiding possible hindrance to ship navigation.

If engine room is the heart of the ship; navigation bridge is its brain. It is an wide platform on top of the accommodation from which the ship is controlled. They are many a times aided with additional narrow passage called bridge wing; to allow broader and better view of the outside to safely maneuver the ship.

The main part of the bridge from which the ship is controlled and steered is called pilot house. According to the maritime rules and regulation it should be constructed such that; it provide a clear view from 1200 port to 1200 starboard from conning position.

Function: Out of various parts of ship; the function of navigation bridge is to provide ample space for officers to look out and maneuver safely. It also holds necessary equipments and controls to change ships speed and its direction while monitoring outside sea condition and establishing proper means of communication.

While not all ships have them but most do to help assist in cargo operation and readjustment of cargo in between the voyage if necessary. Other than that they are also used to load and unload hose, tools, and machinery from the ship.

Installed on deck they are operated by an electric motor (sometimes hydraulically) and are capable of lifting loads up to 50 tones. These cranes can be clearly seen in general cargo ships as one of the critical parts of ship.

A forecastle is the foremost parts of ship. It accounts for the front part of the ships upper deck and is not more than 7% of total deck length. It can be easily identified on a ship structure by a sudden rise in the fore deck near the ships bow.

In earlier days, forecastle of a ship was used for a specific purpose of taking defensive positions by the soldier in the military vessel. These days it is used most for holding and securings major ships parts.

It is the hose for anchoring tools and ground tackles with parts including but not limited to; windlass, haws pipe, anchor chain, chain block, open rail, deck flange, gear box, hydraulic motor, anchor, bollard and foremast. It is the part most used for anchoring operation and checking or maintaining navigation lights on foremast.

Function: Being one of the key structural parts of ship; a forecastle or the foremost part of the fore deck it hold all the necessary equipments required for anchoring operation. On navy ships apart from holding anchoring tools and equipment a forecastle also holds strategic defensive guns position.

It is a fan like mechanical device with blades fitted on the shaft. It rotates with the shaft to produce much needed thrust to propel a ship. The propeller of a ship produce this thrust by converting the rotational energy of its blades to pressure energy.

This is done by using the difference in pressure generated on its near and far side of the blade to push the water aside. Together with its parts; hub, blades and its faces it produce the required thrust for propulsion using newtons third law of motion.

Newtons third law of motion states that; for every action there is an equal and opposite reaction. The propeller of the ship pushes the water backwards creating a net resultant force of equal magnitude that makes the ship move forward.

A propeller is a part of ship propulsion system which includes; engine its shafts (including intermediate & propeller shaft) and propeller. Being one of the vital parts of ship; a propeller is made of non-corrosive alloys such as aluminum and manganese bronze.

Function: A ship would be useless if it does not move; so propellers are installed on ship to provide it a forward motion. So the function of propeller in ship is to provide much needed thrust to propel the ship.

Read Also:  QUESTION OF THEV WEEK: What Is Maritime Lien?

If propeller is the parts of ship that propels then rudder is the one that makes it steer. Situated in the aft of propeller; it is a flat hollow structure that moves from port to starboard turning on its axis to help steer the ship.

It moves to a direction producing resistance to water flow forcing them to move to the other side. In this very process it produce much needed resultant force for the ship to turn it to the opposite side of the altered water flow.

Function: A rudder is the parts of ship that make it steer. Based on the newtons third law of motion it generates enough resultant force to steer a ship to desired direction. The movement of a rudder is controlled by steering gear system. A rudder must be capable of moving from 35 degree port to 35 degree starboard; with the ability of steering gear to move from 35 degree on one side to 30 degree on another in not more than 28 seconds.

A mast is a vertical ship structure mounted on top of bridge and forward of the forecastle towards the ships bow. It accounts for the support platform for the ships derrick and hold necessary equipment such as radars, navigation light and ships horn in case of foremast. They are made of high tensile steel with added rigidity based on the size of derricks it holds. Other than that a ships main mast is also used to hoist ships flag.

Function: Out of different parts of ship the main job of mast is to hold necessary equipment such as radar receiver, navigation lights, ships horn, flags and derricks in some case.