Some medical practitioners have raised the alarm about the excessive intake of herbal concoctions by Nigerians, noting that it could lead to various kidney complications, and, in the long run, death. 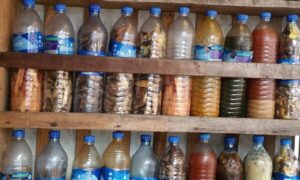 Herbal concoctions are prepared from a mixture of plants’ roots, barks and leaves, which are either soaked in water or alcohol.

It is believed herbal concoctions are most commonly taken by indigent people as a remedy for all kinds of ailments.

The World Health Organisation estimates that about 80 per cent of the population in developing countries still depend on traditional medicine for their primary health care needs.

According to the WHO, many Nigerians, especially in the South-West region, “believe and rely on local herbs for medication” as against orthodox (or modern) medicine.

In an interview with our correspondent, the Nigerian Regional Director, Hope for Us Charity, USA, Dr. Olusina Ajidahun, warned that excessive intake of herbal concoctions could lead to many devastating kidney and liver problems.

He warned that such herbal concoctions have the potential of damaging the kidneys, noting kidney transplant costs as much as N10m.

Ajidahun, who is also the convener of Agbo (herbal concoction) Wars, said, “In one day, I have over six patients admitted for kidney failure, who need dialysis almost their entire life except they can afford kidney transplants.

“All of them drink agbo. We need to start a war against agbo.

“Kidney transplant, at its cheapest, would cost N10m if it is subsidised. Another issue is having the right donor. Take a look at Senator Ike Ekweremadu’s case.

“Now, since the kidneys are foreign and the body can attack, you spend money on immunosuppressant drugs to make sure the body doesn’t destroy the kidneys. That may cost another N2.5m to N5m.

“So, if you want to have a good kidney transplant, budget between N15m and N20m to keep your new kidneys. How many Nigerians can afford it? Some may even die before they get a donor.”

The physician also noted that the demographics of those who take these ‘poisonous mixtures’ are the poor.

Ajidahun said, “People should know that not only are these herbal concoctions unhealthy, but they can also ultimately lead to death. There is no measurement or dosage at all. This is what makes the drugs helpful or harmful. You just swallow and swallow. Some take it in excess and end up getting drunk instead of getting cured.

“How can one mixture cure more than 15 diseases at once and nobody is afraid to take it into their body systems? Every drug has a quantity that is necessary for the body but when people take these mixtures, caution is thrown to the wind.

“Alcohol itself is dangerous to the kidney and a lot of these drinks are mixed with alcohol. It is unhealthy.”

Another medical practitioner, Dr. Olaniran Olabiyi-Hezekiah, noted that some herbal mixtures contain carcinogenic substances and may cause cancer in the long run.

“Some of these mixtures are even alcohol-based and the alcohol they use in mixing these drugs is not quantified. This tells you the dangers these mixtures can pose to humans.

“There is also a link between these concoctions and the development of cancer. Some of them have carcinogenic properties which are toxic to the liver and the kidney.

“We have been saying people should not take it. The cost may be cheap and it may seem to be working but the dangers are imminent and long-term.

Olabiyi-Hezekiah further said that anyone who felt unhealthy should visit the hospital for proper assessment and care, not a herbal home.