Drewry: Port Throughput Down 2.2% During June

The Drewry Container Port Throughput Indices are a series of volume growth/decline indices based on monthly throughput data for a sample of over 235 ports worldwide, representing over 75% of global volumes. The base point for the indices is January 2012 = 100. 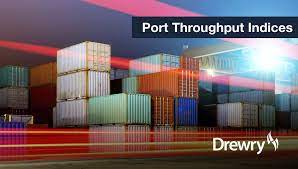 After strong growth in May 2021, the Drewry port throughput index fell by 2.2% monthly in June 2021, but the annual growth of 11.1% confirms that the recovery remains on track. Throughput growth is projected to continue into the 3Q21 peak season, but slowdown in the final quarter of the year. However, all growth forecasts remain highly sensitive to Covid developments.

The Greater China ports index declined MoM by 3 points (0.9%) in June 2021, but was close to 14 points up when compared to June 2020. This monthly decline can largely be attributed to the congestion at Yantian, following the port’s temporary closure in late May as a result of a Covid outbreak. As a result, carriers either skipped the Yantian call or suffered the additional waiting time for a berth at port. Congestion also spread to Hong Kong, which witnessed an 8% monthly decline in June 2021, but the leading central and northern China ports all reported growth.

The Asia (ex-China) index followed the same trend with a fall of 2.4% in monthly volumes, but annual increase of 11.9% in June 2021. Throughput was down in Singapore, Port Klang and Busan (the top three regional hubs) by 3%, 2% and 4%, respectively, with congestion at southern Chinese ports impacting carrier schedules across the region, resulting in vessel delays which led to scheduled calls being dropped.

The Middle East and South Asia index fell by 1.4% monthly but increased by 12.9% YoY in June 2021. At the port level the largest MoM declines were seen at Bandar Abbas, which continues to see trade fall as a result of sanctions, and Mundra which reported a slowdown in transhipment traffic.

After reaching the record-high level of 171.2 points in May 2021, the North American ports throughput index plunged by 8.5% to 156.7 in June 2021, but it is still 27.5% higher than in June 2020, and almost 11% higher on a 2-year basis. Congestion remains a major problem across a growing number of ports, and volumes were down at Long Beach and Los Angeles as a result of the Yantian closure.

The Latin American index followed the same trend by witnessing a 4.1% MoM decline, but a strong 24.6% annual gain to stand at 124.7 in June 2021. May saw particularly strong volumes across the Brazilian and Panamian ports, but throughput has normalised in June.

The European Port throughput index remained unchanged at 123.4 points for the last three months. While the 14.8% year-on-year improvement is positive, on a 2-year basis the index is up by just 0.7% indicating that the European trade recovery is lagging behind other markets.

Oceania’s index declined by 6% monthly with all major Australian hubs (Melbourne, Sydney and Brisbane) recording a fall in June 2021, but the index was close to 2% higher than in June 2021. The Africa index improved by 1.7% monthly and 19.4% over the same period in 2020. However, we advise caution when considering the Africa index as it is based on a small sample size.