Demand for dry bulk tonnage has remained high in the S&P market. In its latest weekly report, shipbroker Allied Shipbroking said that “on the dry bulk side, interest for SnP transactions remained vivid for yet another week, with several units of different size classes changing hands. However, it is worth stating that a strong number of capes were reported as sold last week. The firm freight market and the robust sentiment amongst buyers led to a rise of deals in the segment as a whole. Given the persistent strong buying interest, it is of little surprise that second-hand asset prices have followed an upward trajectory since the beginning of the year. On the tanker side, a strong rebound was witnessed in terms of transaction volumes, after a prolong period of limited activity. Nevertheless, the majority of units that changed hands last week were included in two massive enbloc deals made respectively by Clean Sea Transport and another undisclosed buyer. Given that fundamentals in the sector are still poor and asset prices have not yet softened, the expectation is for activity to fall back once more”, Allied noted. 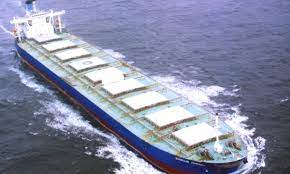 In a separate note, Banchero Costa added that in the dry segment, “the market is generally healthy, and Owners are Sellers against very firm and weekly rising prices. Capesize “True Endurance” around 179,000 dwt 2012 Hyundai was sold to unidentified buyers for $32.3 mln, which appears to be a good deal for buyers in a rallying capesize market.

“Vorana Manx” Kamsarmax resale ready for delivery. A Greek buyer paid an impressive $42.15 mln for the December ex-yard. Supramax “Medi Okinawa” 56000 dwt 2011 Mitsui, which we reported last week for $21.5 mln, appears to have been committed at a much higher price, i.e. $23,25 mln. The large handy bulkers “New Face” and “New Days” 38000 dwt 2017 Shin Kochi were sold for $26 mln each, but we understand Charterers may have exercised their purchase option/first refusal on the vessels.

Meanwhile, in the newbuilding market, Allied noted that it was“a quiet week for the dry bulk newbuilding market, as no fresh business was reported during these past 7 days. The robust freight market and the healthy sentiment among buyers though have helped retain interest at vivid levels for newbuilding projects. However, the high newbuilding prices and the preference by shipyards to focus on more profitable projects (such as containerships and gas carriers) have maintained newbuilding activity at modest levels thus far.

This may turn out beneficial for owners, who have seen in the past, overconfidence leading to an ordering spree and eventually to a sharp oversupply in the market. A quiet week was seen in the tankers market as well. However, this is of little surprise here, given the devastated sentiment amongst owners and the disappointing freight earnings. Meanwhile, current newbuilding prices are relatively excessive right now when compared to the current fundamentals, curbing buying appetite even further. Finally, the ordering splurge in containerships continued this past week with 13 medium size containerships being added to the orderbook, while fresh orders were seen in the gas sector as well”, the shipbroker concluded.