The dry bulk market’s rebound has prompted a surge in dealings for bulkers as well. In its latest weekly report, shipbroker Intermodal said that “dry Buk Sales and Purchase activity has heated up during 2021, reaching record high levels during the first half of the year. The increased interest has been driven by upbeat freight rates reaching more than decade highs, combined with assets being undervalued compared to both actual earnings and earnings expectations; Earnings and asset values expectations flared up after the counter seasonal surge in freight rates during Q1, which saw March recording the highest monthly dry SnP figure by historical standards, followed by June, when Panamax and Supramax freight rates hit the highest level since 2010. SnP monthly transactions have decelerated so far into July with the freight market correcting – albeit from multi year high levels – however asset values continue their upward trend. Since June, notable increases in values of more than 7% are observed in Cape and Kasmarmax particularly in the 5-10 Y age bracket. Below we present a short overview of the dry SnP transactions since March broken down by type of vessel” 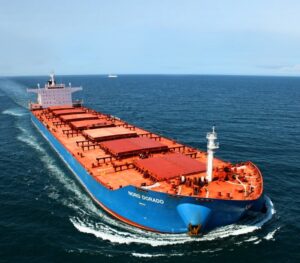 According to Intermodal’s George Kallianiotis, “during March 2021, total S&P transactions increased by approx. 25% compared to February 2021, reaching more than 80 deals. Slightly less than 20 Handysize vessels, marginally more than 25 Supramax/Ultramax bulkers, around 25 Panamax/Kamsarmax vessels and finally more than 10 Capesize/Newcastlemaxes changed hands back then. Supramaxes and Handysize vessels corresponded to almost half of the transactions that formed the total S&P deal landscape. During April 2021, total SnP deals amounted to around 65, decreasing by approx. 25% vs the previous month. The decrease was driven mainly by Handysize and Supramax vessels and especially the latter that ended up accounting for around half of those committed in March 2021. As for the other segments, Kamsarmax and Capesize vessels maintained similar levels m-o-m while the Ultramax tonnage was the only one that a showed significant increase of around 50% compared to the previous month. Moving on to May 2021, the total deals increased by around 10 in number of vessels. Handysize and Supramax deals surged by more than 50% m-o-m while the deals across all the other segments decreased significantly. Regarding June 2021, we can argue that the number of deals did not differ significantly compared to May 2021 with Handysize, Kamsarmax, Post-Panamax and Capesize following a similar pattern m-o-m. However, Panamax and Ultramax bulkers that changed hands significantly increased tracking the freight market momentum and the number of Supramax decreased by approx. 70% m-o-m”, Kallianiotis said.

“As far as the current month, the total transactions that have taken place so far in July amount to approx. 40. At the current pace, it looks like the full monthly figure will end up significantly below the monthly average deals recorded so far in 2021, driven mainly by Handysize and Panamax transactions slowing down. It remains to be seen, whether SnP volumes for the larger dry bulk segment will start catching up to the smaller ones, given constructive market expectations for Capesize in the next months”, Intermodal’s analyst concluded.