The Economic and Financial Crimes Commission (EFCC) said it has recovered about N13bn as proceeds of illegal payments made under the subsidy regime between 2017 and 2021. 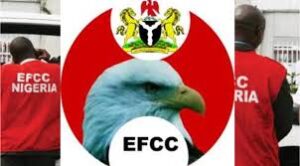 This was based on the National inherent risk assessment of money laundering and terrorist financing in the Nigerian extractive sector document obtained by our correspondent from the website of the Nigeria Financial Intelligence Unit.

The report read in part: “The Economic and Financial Crimes Commission, the agency responsible for the investigation and prosecution of fraudulent subsidies in the oil and gas in Nigeria recovered N12,998,963,178.29 as proceeds of illegal payment made under the subsidy regime between 2017 and 2021.”

It was further noted in the report that there were several opportunities for fraudulent activities in the oil and gas sector.

The report added, “Opportunities for fraudulent activities exist in the oil and gas sector from extraction to sales of refined products to consumers. The absence of reliable equipment to measure the volume of crude oil being extracted makes it impossible to estimate the volume of crude oil extracted and even stolen through oil theft and vandalism. Oil theft also occurs in the downstream sector, as petrol pumps are rigged at petrol stations or adulterated.

“Also, to be noted is the sale of petroleum products on the ‘black market’ giving rise to petroleum products being sold at exorbitant prices. Of concern is the emerging trend of filling station attendants acting as money agents, without appropriate customer due diligence carried out. It should be stated, however, that in most cases, the amount sold to an individual is usually not suspicious. However, if left unchecked, this practice could pose a threat to the country.”

It also noted that there had been diversion of petroleum products to non-designated retail outlets, which is a fraudulent practice that leverages on the fuel subsidy regime.

The report added, “Other fraudulent practices include the diversion of petroleum products to non-designated retail outlets to gain undue financial advantage. This practice may be intra- state, inter-state and across the borders of Nigeria to neighbouring countries.

“The Joint Border Exercise in August 2019 with operation code-named ‘Exercise Swift Response’ resulted in large number of seizures of trucks and other vehicles used to smuggle refined products outside the country. This exercise was coordinated by the Office of the National Security Adviser. This is also connected to the subsidy regime as the cost of PMS in Nigeria is significantly lower than in neighbouring countries.

“Another fraudulent practice is the smuggling of petroleum products. The NNPC recorded daily Premium Motor Spirit evacuation spikes in various depots across the country, against government projected volumes of daily consumption. These spikes led to the reactivation of Operation White II – an inter-agency task team comprising the NNPC, stakeholders and LEAs in May 2021. It was further reported that these volumes were being smuggled out to neighbouring countries like Benin Republic, Cameroun, Niger republic etc., with higher PMS prices compared to Nigeria. The OPW II team was mandated to curtail the smuggling, diversion and hoarding of PMS to ensure the Nation’s energy security. Intelligence-driven investigations are ongoing.”

In its biannual report known as Africa’s Pulse, which was released in April this year, the World Bank said that increasing fuel subsidy put the Nigerian economy at a high risk as subsidy payments could significantly impact public finance and pose debt sustainability concerns.

In 2021, the Nigerian National Petroleum Corporation said fuel subsidy gulped N1.43tn, although there was no record for under-recovery in January.

The National Assembly approved N4tn as fuel subsidy bill for 2022, which was an increase of 179.72 per cent over the previous year’s subsidy bill.

However, experts have warned the Federal Government that the N4tn fuel subsidy bill would adversely affect the country’s economy.