The Economic and Financial Crime Commission (EFCC) has presented the sixth witness and tendered more evidences against the former Director General of the Nigerian Maritime Administration and Safety Agency (NIMASA) Patrick Akpobolokemi and three others over alleged N8.5 billion fraud before justice Ayokunle Faaji of the Federal High Court sitting in Ikoyi, Lagos. 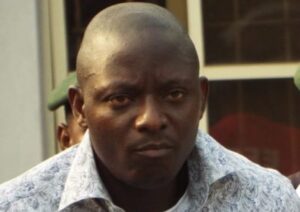 Akpobolokemi is standing trial alongside Major-General Emmanuel Atewe (rtd), a former Commander of the Joint Military Task Force Operation Pulo Shield, and two other staff of the agency, Kime Engonzu and Josphine Otuaga.

They are being prosecuted for an amended 22-count charge bordering on money laundering.

One of the counts reads: “That you, Patrick Ziadeke Akpobolokemi, Major General Emmanuel Atewe, Kime Engozu, and Josphine Otuaga sometimes in 2014, in Lagos, within the jurisdiction of this Court, with intent to defraud, conspired amongst yourselves to commit an offence to wit: conversion of the sum of N8,537,586,798.58 property of the Nigerian Maritime Administration and Safety Agency and you thereby committed an offence contrary to Section 18 (a) of the Money Laundering (Prohibition) Act 2012 and punishable under Section 15 (3) of the same Act.”

They had pleaded “not guilty” to the charges, thereby prompting the commencement of their trial.

At the resumed sitting on Monday, the prosecuting counsel, Suleiman Suleiman, presented the sixth prosecution witness, Benedict Agweyi, a Forensic Documents Examiner and the Commission’s acting Director of Forensics.

While being led in evidence by Suleiman, the witness told the Court that he received a letter of request with some documents attached for forensic examination, comparison and report from the office of the Deputy Director of Operations, EFCC, Lagos Office on April 25, 2016.

He said: “There were two categories of documents attached, including disputed documents marked X1 to X12, and known specimen handwriting and signatures marked as A1 to A8; B1 to B6, and C1 to C13.

In forensically analysing the documents, Agweyi said he used three methodologies bearing in mind three principles in signature analysis that guided the analysis of this nature.

According to him, no two writers share the same unique combination of handwriting characteristics.

He further told the court that “On the basis of this, I used the first methodology, which was a simulation of the various categories of writings, using a pencil, a handheld magnifier, a piece of paper, and my naked eyes.

“This methodology enabled me to identify certain characteristics among which include the commencement and terminal style of the writings; the letterforms and structural forms of the writings and the connecting strokes, among others.

“The second methodology was a stereo-microscopic analysis using a Leica stereo microscope, which enabled me to analyse the different categories of writings under magnification ranging from the original sizes to over 20 times the original sizes of the writings.

“This enabled me to identify microscopic features including line formation, the direction of pen movement, and the speed of the writing in absence of tremor among others.”

Testifying further, he told the Court that he used a third methodology, which was a video spectra comparative analysis with the aid of the VSC 5000.

According to him, “This enabled me to further compare the disputed and known specimen handwritings under magnification. It enabled me identify the existence or non-existence of characteristics that are similar or otherwise.”

When asked by Suleiman what he made out of his analysis, he said, “On the conclusion of my analysis, I reduced my findings into a report dated 7 May, 2016 and my opinion was to the effect that the authors of the known specimens and signatures on the documents marked A1 to A8 and B1 to B6 also made the signatures on the disputed documents marked X1 to X12 and the authors of the known specimen and handwriting marked C1 to C13 also made the handwriting and signatures marked X1 to X10.”

He, thereafter, identified his report, which was already before the Court as Exhibit G series.

“I have no personal interest in this matter; and during the analysis, I never knew the names of those involved other than what was on the face of the documents,” he said.