After being detained for nearly three months in Equatorial Guinea, a 300,000 dwt VLCC registered in the Marshall Islands is going to be sent to Nigeria despite protests for its Norwegian ship manager. The tanker Heroic Idun left Nigeria in early August after a dispute with the Nigerian authorities and accusations of oil theft. 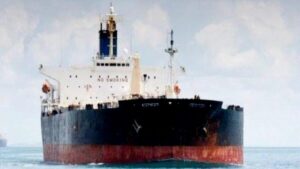 According to the management company OSM, the Heroic Idun was ordered to load a cargo of oil in early August from the Akpo terminal in Nigeria. “Whilst waiting for the necessary clearance papers after having tendered notice of readiness in line with voyage orders received from charterers, the Nigerian navy approached the vessel under cover of darkness in a way that caused serious concerns,” OSM reports. The Nigerians allege after the tanker departed the terminal, the Nigerian Navy ship Gongola tried to establish communication with the tanker while other reports said the Nigerian vessel approached the tanker without identifying itself.

What transpired next became the basis for the international incident. According to OSM, believing that it was under attack from pirates, the vessel departed into international waters. The tanker issued a warning of an attempted boarding that was recorded by the International Maritime Bureau and sailed south toward Sao Tome and Principe. The Nigerian forces requested the assistance of neighboring Equatorial Guinea in the pursuit of the crude oil tanker. Equatorial Guinea Vice President Teodoro Nguema became involved reporting that the vessel was stopped on the afternoon of August 12 and ordered to sail to Equatorial Guinea.

“The vessel and its 26 multinational crew members have now been detained in Equatorial Guinea for more than 80 days,” said Finn Amund Norbye, CEO of OSM Group. “The seafarers have been treated as criminals, without any formal charges or legal process for close to three months, it is nothing short of a shocking maritime injustice.”

OSM said it has worked continuously to bring the situation to a conclusion. They reported a fine was paid at the end of September to settle accusations that the vessel had failed to properly identify itself and lacked permission to enter the waters of Equatorial Guinea. OSM said the fine was paid with a promise of the release of the vessel and its crew.

Nguema Tweeted a new message yesterday saying “In my capacity as Head of Defense and Security, I have authorized the delivery of the supertanker Heroic Idun to the Nigerian Government.” OSM confirmed that it has been informed that a decision has been made by the authorities of Equatorial Guinea and Nigeria to “move the vessel back to Nigeria for further investigations.”

The company is strongly protesting the continuing detention, saying that with the latest development “the chance of any swift resolution is further diminished.” They are continuing to work through channels in an attempt to secure the release of the tanker and its crew.