The European Commission resumed its in-depth investigation into the proposed acquisition of South Korea’s Daewoo Shipbuilding & Marine Engineering Co. (DSME) by Hyundai Heavy Industries Holdings (HHIH). The EU competition authority is now targeted January 20, 2022, as the provisional deadline for the completion of the review. 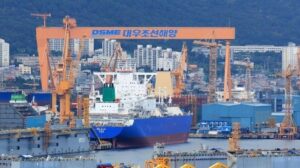 Officials at Korea Shipbuilding & Offshore Engineering Co. (KSOE), which would be the parent company of the two shipbuilders after the merger, told the South Korean news outlet Yonhap that they had answered all the questions from the EU antitrust regulators. They said that efforts were continuing to win approval from the EU as well as South Korean and Japanese authorities. Nether of the other countries has set a timeline for their reviews.

The merger agreement was first submitted to the European Commission two years ago as part of the antitrust process, but a month later the EU said that after its preliminary review it had concerns that the sale of DSME might reduce competition in the marketplace. They highlighted that European shipowners and operators represented a third of the market for ship construction.

“The Commission has concerns that the remaining shipbuilders would not exert sufficient competitive pressure on the merged entity in the four markets concerned by the transaction. It also has concerns that the customers would not have sufficient bargaining power to constrain the merged entity,” the EC said in announcing its plans to launch an in-depth review.

The confirmation that the review has resumed comes after recent reports in South Korea that said the EU had reached a consensus to object to the merger. Reported in The Korea Times, they said that the EU was focused on the lack of competition and monopoly especially for gas carriers. VesselsValue confirmed the two shipbuilders’ dominance in the segment reporting that approximately 60 percent of the current 91 orders for LNG carriers are either with Hyundai or DSME.

Analysts report that the combination of the two shipbuilders would result in KSOE having between a fourth and a fifth of the total shipbuilding market. Hyundai is Korea’s largest shipbuilder while DSME ranks fourth in the market with about a six percent share. The combination was launched as the shipbuilding market was contracting and DSME was reporting declining financial results. Despite the surge in orders in 2021, DSME continues to report losses with analysts forecasting a decline in new orders in the year ahead. The failure to complete the merger they believe is hurting DSME’s reputation.

The EC’s competitive review was suspended in July 2020 when the regulators said that they had not received information from the two companies. It was the third delay for the review which under the EU Merger Regulation is required to be completed in 90 working days. In part blaming the pandemic for slowing the review process and providing details to EU regulators, Hyundai and Korea Development Bank as the largest shareholder in DSME have repeatedly pushed back the date for the closing of the transaction. Their latest agreement extended the deadline to the end of 2021.

Hyundai is rumored to have made several informal proposals to the EU to win approval of the merger. The EU expressed concern over the high barriers to entry into shipbuilding, with Hyundai reportedly offering to license key technologies to European shipbuilders as well as efforts to support the growth of European shipbuilding. Hyundai is also rumored to have proposed selling one of its current shipyards to win approval for the merger.