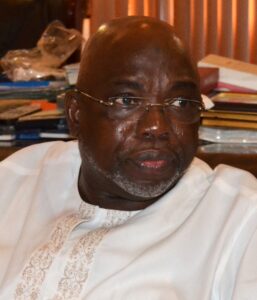 In a statement he issued on Sunday, the former CRFFN chair raised alarm about the membership of the electoral committee that has been constituted.

According to Olanrewaju, even though freight forwarders appreciate the Minister for the thought of constituting the CRFFN election committee, but he added that it was doubtful if the minister actually thought about the integrity of members of the electoral body.

“It is the uncertainty whether the Honorable Minister indeed cares much about both the professional integrity and the integrity of the electoral processes starting with the committee composition, especially with regards to scrutiny of their respective integrity and putting in the right perspective their parochial interests in representations, if any”, the statement added.

The CRFFN ex-boss, also noted that a fundamental error has been established in how the intended electioneering process would go.

Olanrewaju added that, “unconfirmed reports have it that, there exists an internal understanding and arrangements for the appointed politicians to work assiduously and to deploy a process that will guarantee the return of the outgone freight forwarders back into the Governing Council of the CRFFN.

Raising further alarm about the alleged intending foul play, the freight forwarder alleged further that the immediate past Governing Council of the CRFFN set up a ‘Tactical & Strategic Electoral Committee’ before their tenure elapsed, and that, “the components of such electoral arrangements are still very much around in the present making”.

“This expression is apt because we aware that, “in a “first-past-the-post electoral system, a vote is tactical when it is cast for a selected candidate not on merit, but to best influence to ensure such candidate wins in the constituency”.

Tactical voting arrangements, involves subtly structuring and agreeing on an incentive that will be redeemed during or later, having the capacity to necessitate and influencing the electioneering process and the election results even when the candidates in favor is a misfits and unpopular”, he added.

According to the statement another crucial observations is the hidden identity of the Electoral Committee Members, which “further cast integrity question on the electoral arrangements”.

It added that, “based on the foregoing, freight forwarders require a confidence-rekindling statement by the Honorable Minister on the issues raised above”.

The ex-chair of CRFFN argued that, under the circumstances and given the anxieties, it is better to allow the Nigeria Shippers’ Council to conduct the coming governing council election, as it did in 2008, in accordance with provisions of the CRFFN ACT of 2007.