Ex-Militants In Ondo Plead For Inclusion In Pipeline Surveillance Contract

Some ex- militants in Ondo State have called for inclusion in pipeline and waterway surveillance contract awarded to former militants by the state government. 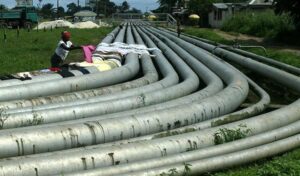 The ex-militants, formerly under the aegis of Sea Wolf Avengers, made the appeal in a statement issued in Lagos on Tuesday by their leader, Deji Ehinmowo.

Ehinmowo expressed displeasure with the exclusion of the group in the surveillance contract.

According to him, in 2017 when Vice-President Yemi Osinbajo was the Acting President, he came to Igbokoda where the youths told him that “our major problem is amnesty and surveillance.”

“We told the vice president that we need amnesty and surveillance contract and he directed Gov. Oluwarotimi Akeredolu to immediately address the issue.

“After the governor met with the Federal Government, he advised all the militants to surrender their arms and a meeting was held at the International Culture and Event Centre (The Dome) in Akure on Nov. 9, 2017 where Amnesty programme for ex-militants was flagged-off.

“After the programme, we were given twenty-one days to surrender our arms with a promise that we would be paid stipends as well as expose us to training on skill acquisition programmes.

“At the event, there was also a promise that some us would be sent abroad to acquire more skills”, he said.

He particularly expressed disappointment that government had not kept it promises to the group on their inclusion in the amnesty programme.

“We have made several reports and nothing has been done up till now.

“Why are they not paying us in Ondo State. Do they want us to go back to our vomits?

“To our greatest surprise, government is doing empowerment through OSOPADEC for the youths of the region, that is pipeline security surveillance, but excluded us.

“In Ilaje and Ese Odo Local Government areas, we have the old amnesty when militants surrendered arms during the tenure of the former President Musa Yar’Adua which was the first phase of the amnesty.

“We also have the new amnesty. This group under the aegis of Sea Wolf Avengers under my leadership as the most senior general, surrendered arms in the 2017 amnesty programme.

“We are the major camp in the new amnesty programme that submitted arms and ammunition in 2017 in Ilaje,” he said.

Ehinmowo said the former militants worked for the re-election of Governor Akeredolu as part of their commitment to ensure the sustainance of the amnesty programme in the state.

“We worked for the re-election of the Ondo State Governor, Arakunrin Rotimi Akeredolu, and we believe we should benefit from the amnesty programme and the government is supposed to use the surveillance contract to take care of us.

“It is our turn to be empowered with surveillance job. If the state government wants to give it to Ilaje, it should be between the old and new amnesty groups.

“We leant that N300,000 would be given to each camp which would be about N30,000 per slot out of N28 million surveillance contract.

“We are urging the government to separate the old amnesty from the new amnesty.

“We that surrendered arms in 2017, our percentage should be given to us, otherwise, the surveillance will not work”, he stated.