Explosives Approved for Use in Golden Ray Wreck Removal

Another day, another obstacle in the wreck removal of the Golden Ray.

The St. Simons Sound Incident Response said that cutting operations to separate the latest section, known as Section Three, from the remainder Golden Ray resumed on Wednesday after being put on hold on June 11 for “routine” maintenance of the cutting apparatus. 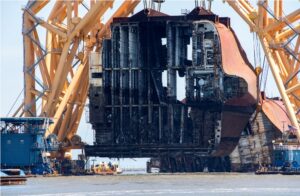 An update today from the Unified Command (UC) said it has now approved the use of a type of explosive to make “precise cuts” through reinforced steel brackets that are obstructing the path of the cutting chain. Use of the “Low Hazard Flexible Linear-Shaped Charges (LH FLSC)” will be on an as needed basis and conducted by federally licensed and qualified personnel who will follow strict safety protocols for the storage, transport and handling of the charges, the UC said.

Environmental impacts are said to be be minimal because all detonations will be confined to the interior of the wreck above the water line and remotely fired from a safe site on the topside of the wreck. All fire suppression systems will also be energized before, during and after charge cutting operation.

This all comes after a fire tore through the inside of the wreck on May 14 that deformed the side plates of the lifting lugs attached to the topside of the Golden Ray. Welding technicians have continued to make repairs to the side plates of the lifting lugs for the remaining three sections (Sections Four, Five and Six). Response engineers will reinspect the lugs using non-destructive testing once the repairs are complete.

“Safety is our highest priority,” said U.S. Coast Guard Cmdr. Efren Lopez, federal on-scene coordinator. “By using the cutting charges, we can greatly reduce any safety risks to our personnel when accessing the interior of the wreck to clear any obstructions while continuing a removal operation that safeguards the community and the environment.”

The Golden Ray lost stability and came to rest on a sand bar in St. Simons Sound, Georgia as it departed the Port of Brunswick with 4,200 vehicles in its deck all the way back in September 2019.

The wreck removal operation involves making seven cuts through Golden Ray’s hull using the heavy-lift vessel VB-10000, separating the wreck into eight sections for lifting and removal. With the exception of section-by-section weight shedding (i.e. removal of cars and debris), all vehicles have remained inside the wreck as each section is accessed and removed. All work is being conducted within an Environmental Protection Barrier that has been constructed around the wreck.

Since May’s fire, the operation is yet to complete another cut, leaving three cuts and four sections remaining in the operation.