In a bid to arrest deforestation currently ravaging the country, the Federal Government of Nigeria has placed a ban on the export of charcoal just as hundreds of trucks loaded with the commodity are currently unattended to at the ports and exporters counting lose. 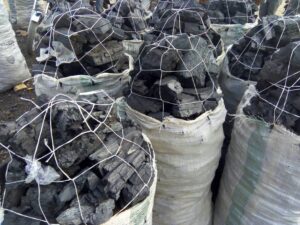 Although the memo giving the directive to stop the ban of charcoal could not be obtained by our correspondent, but the Deputy National Public Relations of the Nigeria Customs Service, NCS, Mr. Timi Bomodi, a Deputy Comptroller confirmed that charcoal from wood has been banned.

Bomodi also said that the natural coal is not prohibited from export adding that only coal made from wood burning is currently on the prohibition list of exports.

Similarly, the National Public Relation Officer of the Customs Service, Mr. Joseph Atta, said that it is not for the Customs to ban any item as the agency is only meant to carry out the policies of Government.

Also speaking on the development, the Customs Public Relations Officer of the Tin Can Island Port, Mr. Uche Ejieseme said that the Command recently received a circular that charcoal is now banned.

Our correspondent confirmed that there are over 50 fully-loaded trucks of charcoal stock at Truck Parks waiting to get into the ports, but were denied entry due to the circular on the ban.

A driver of one the trucks loaded with charcoal told Vanguard that there is a big problem as many trucks of charcoal that were on their to the ports were rejected and refused entry into the ports as they were asked to turned back.

Speaking on the development, Secretary General of Tropical Wood Exporters Association of Nigeria (TWEAN); Mr. Joseph Odiase said that the ban on charcoal has been on for some time, it is just that Nigerians claimed to be ignorant of the ban.

Odiase also said the ban was not effective because the exporting public were probably not sanitized enough hence the continued exportation despite the embargo.

He also said that what was banned was wood and related products which include coal, but was not categorically spelt as charcoal.

He explained that the issue about forest and forest product exportation is not about the environment because there is a large clamour about climate change.

“The fact of the matter is that can human be independent of their environment.” He queried

“Initially, what was communicated was partial, what the circular said was wood and related products which includes charcoal but because it was not categorically spelt out as charcoal but it has been banned long ago.

“What are we supposed to do, we are supposed to put a sustainable mechanism of planting, afforestation and all that, that is why we have the National Forest Trust Fund.