The Federal Government through the Ministry of Finance and Nigeria Customs Service (NCS) on Tuesday commissioned three mobile cargo scanners to checkmate importation of arms and ammunition and other prohibited items into the country through seaports. 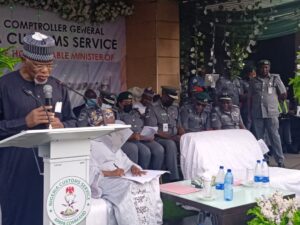 The commissioning covers the ones installed at the Apapa and Tin Can Island ports in Lagos, as well as Onne port respectively. Each of the scanners has the capacity to process and scan over 500 containers in a day.

Recall that In July 2020, the Federal Executive Council (FEC), approved $18.12 million for the purchase of the cargo scanners and were delivered last year December to ease port operations and eliminate 100 per cent examination, which used to fuel corruption between stakeholders and examination officers at the ports.

The contract was actually awarded to a company named Messrs Airwave Limited inclusive of foreign components, and a local component of N3. 255 billion inclusive of five percent VAT.

Speaking at the commissioning of the new Nuctech Mobile Scanners for the Customs, Minister of Finance, Budget and National Planning, Zainab Ahmed commended the Federal Executive Council (FEC) for granting approval for the Procurement and Installation of the Scanners and also the training of 120 officers of the NCS. 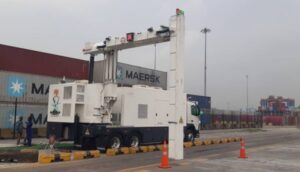 She said the project would no doubt aid the NCS in the delivery of its mandates, in line with the key priorities of President Muhammadu Buhari-led administration.

According to her, the scanner has the capacity to detect prohibited import concealed in cargoes, and that it will enable more cargoes to be scanned and also bring about the desired efficiency and effectiveness in the cargo examination processes.

“The commissioning of these three non-intrusive scanners is in line with efforts to expedite Customs operations and achieve its mandate of ease of doing business, trade facilitation and preventing port congestion.

“These three scanners will help increase revenue for the government and improve national security.

It will also help enhance the remote audit trail of goods within the port system,” she said.

She implored the Nigerian Ports Authority (NPA), port terminal operators and all stakeholders in the port to cooperate with NCS to take full advantage of the scanners.

“I therefore implore the management of the NCS to collaborate with the scanners contractor, to ensure proper maintenance and full utilisation of the scanners within the 30 months provided in the contract agreement, as well as enhanced capacity building and training 120 NCS scanning officers,” she added.

She said that efforts are being made to procure more scanners for the seaports, land borders and airports in the country, saying the essence is to improve efficiency and generate more revenue to the government.

Also speaking at the event, the Comptroller General of Nigeria Customs Service (NCS), Col. Hameed Ali (Rtd), said the scanners commissioned is an intervention, pending the commencement of the Customs modernization project that will deploy 135 scanners, adding that by 2023, there would be scanners all over Nigeria.

According to him, as part of the reform strategy of the present administration, the Service was compelled to adopt technology as the linchpin for trade facilitation, adding that by recognising its strategic importance, the Service has chosen to embrace it in its entirety.

“Our modernisation project seeks to automate all our processes and procedures, of which the inspection of imports and exports is fundamental. We know that to remain competitive our ports have to be more effective and efficient.

“As trade increases in volume, so must our capacity for facilitation. Efficient cargo management and the full automation of Customs and other regulatory processes is guaranteed to bring down the cost of clearing, and ultimately the prices of goods in the open market, an occurrence that will be beneficial to consumers in Nigeria.

“We also understand that technology should be deployed in a manner most suitable to our needs and environment. This is why we have developed a standard operating procedure (SOP) for the use of these scanners. Our SOPs provide all stakeholders with a working guide as to their individual responsibilities,” he explained.

However, he said from Customs officers, clearing agents, shipping companies, to terminal operators, roles are defined to show who should be doing what, where, how and when. He said it is the spelling out of these roles and how they should be performed that would ensure that the Service get the maximum benefits from using these non-intrusive examination equipment.

“As the lead agency in trade facilitation, we are constantly in the business of re-inventing ourselves. Not satisfied with the achievements of the past, our focus is on making the present great and the future greater. However, because we acknowledge the importance of partnering with other relevant government regulatory agencies, we have created windows that will enable connectivity to our systems.

“Where physical joint examinations were previously conducted by all relevant agencies, the scanning process will not only reduce the stress associated with positioning, off-loading and taking inventory of containers. It will store recorded images in a safe format easily accessible by all agencies from the comfort of their offices. It makes the auditing of transactions using these images easier and will definitely checkmate attempts by non-compliant traders to cheat the system.

“The challenge of security is of immense concern to all well-meaning citizens. Since we know that a good number of items which pose a threat to national security find their way through our various entry points, we believe that the equipment that is being commissioned today will greatly enhance our capacity to defend our dear nation,” he said.

“As we approach phase one of the e-customs modernization we shall see the deployment of scanners to all sea ports, airports and approved land borders.

“We shall also witness the launch of a central data management system when live feeds from our ports and borders can be viewed and monitored from our headquarters,” Ali said.