FG Frowns At Pace Of Work At Daura Transport University 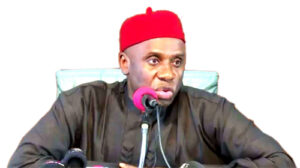 Amaechi, after a tour of the school, to access the progress of work summoned the contractors to a meeting in his office on Jan. 2 2022.

“The expectation is that by now they should have been able to complete nearly all the buildings but they said they are doing it in phases.

“If they continue at that pace it will take like 10 years for them to complete all the buildings.

“We have invited them to the office on Tuesday to explain why instead of taking the buildings at the same time, they are taking just two hostels, two classrooms,. That is not enough.

“The entire thing we agreed with them was that they were going do a project worth $50million both management and construction and they have not done that here.

“They chose to do what they consider to be phase 1 and they said by next year when they admit students, they would be constructing the phase 2,” Amaechi said.

According to the minister, the project upon completion will be managed by the Chinese for a period of five years after which it will be handed over to the government.

The university project which commenced Dec.3, 2019 was projected to be completed at the end of Sept. 2021.