FIGHT OVER ANLCA SECRETARIAT: We Are Investigating Who Gave NECOM Orders To Remove Seal At Secretariat —- BoT Chair

· Police Was Misled To Have Shut The Secretariat –NECOM

The factional chairman of the Board of Trustees of the Association of the Nigeria Licensed Customs Agents (ANLCA); Alhaji Taiwo Mustapha has said the board is investigating the breaking of the seal that the Police placed on the National Secretariat of the association. 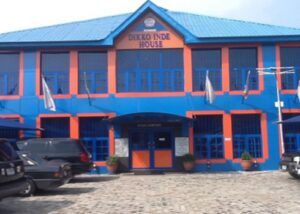 However, checks by Shipping Position Daily reveals that less than 24 hours after the secretariat was sealed, some members of the national executive committee (NECOM) allegedly re-opened and removed the seal placed by the Police at the secretariat

The NECOM had claimed that the sealing of the secretariat was erroneously done; alleging that the Police was misled to believe that there was a court injunction to that effect.

The Vice President of the Association, Dr, Kayode Farinto, had claimed during a live radio programme that the Police upon realizing that there was nothing of such, gave approval to remove the seal.

In his words: “Police goofed to have locked the secretariat, they were misled and then they were made to believe that there was a court injunction or court ruling, that directed the police to seal the secretariat, meanwhile nothing like that, later they realized that there was nothing like that, so the seal up was an act that is tantamount to illegality, hence Police believed that it must be opened and that was why it was opened.

“The sealing of the secretariat was erroneously done and we made the Police realize that it was wrong ab initio to have sealed it without the court process and they agreed with us and it was unsealed”, he said.

However why reacting to the reopening of the secretariat, the factional BoT chairman, Alhaji Taiwo Mustapha, informed that the board is currently investigating how the National Executive Committee (NECOM) members got approval to remove the seal placed by the Police, while stating that the law will take its full course soon.

He said, “the leopard can never change its skin, when you see people who believe that they can do anything and nothing will happen and that’s the kind of thing contributing to the menace we have in the society today. The police have come, they have sealed and you have seen the seal there and without minding the consequences, you went and removed the seal, if the police feel that that is the right thing, let them go free, but I believe that NPF have not gone bad to that level where they can go free with this,

“It was as a result of that boy that was stabbed at Tin Can that we decided to take that decision because it is already getting to a level where we have started killing ourselves, I think the best bet is to take action, and that was why I went to report them, so whoever must have given them the go ahead to break the seal, let’s wait and see; we will know soon”, he said.

Mustapha, while also reacting to a recent Front Page Comment published in Shipping Position Daily last week, titled “Can The Gladiators Consider This” where it was suggested that the present NECOM should recongnise the Taiwo Mustapha as the Chairman of the board, while Taiye Oyeniyi step down as the secretary to allow peace reign, noted that all efforts have been made in the past by him to consider the peace move, but said the Tony Iju-led faction have refused to walk the path, describing the current NECOM as leopard that can never change its skin.

“It is his own regime and I have told him if I have followed what my people have told me over the years, that we should take over the secretariat, we would have done that far, but I said what do I stand to gain by unleashing violence in the secretariat that I am supposed to be the custodian of, as the board chairman and that is why I left it that way.

“You know it’s a case of two women fighting over one baby, the two claiming to be the mother of the child, and one says you don’t want me to have it, let’s kill the baby, then you should know who is actually the criminal among them, that is the bottom line of what we are saying

“I have made several efforts to talk to Tony Iju, and Henry Njoku, but not for one day has either of them called me to say let’s sit down and talk this out. I challenge them with their Bible to swear if they have any day called or made any efforts towards peace.

“What we have said in the past when that option came up was that, we are all one, eight of us, plus Tony Iju, making us to be nine. I suggested to Iju to see how we can talk this thing over and their position was like the election never took place, and I said if the election never took place, then lets conduct another one, but they never did, it was thereafter that our guys revolted that we can’t continue like this

“That was when they came and said Taiye Oyeniyi should step down and we said okay, if Taiye Oyeniyi was going to step down, let us call a meeting of all the board members and talk this within ourselves; they never did. I told Tony Iju, but they never did up till this moment”.