Fights Over Marine Boundaries Are Creating Safe Zones For Pirates

In January, Nigerian-based pirates seized the MV Mozart, a large Liberian-flagged container ship heading to Cape Town, South Africa, from Lagos, Nigeria, as the ship sailed close to Sao Tome’s maritime border. Fifteen abducted officers and crew members were released in February after the shipping company paid a ransom, but one sailor died in the assault. 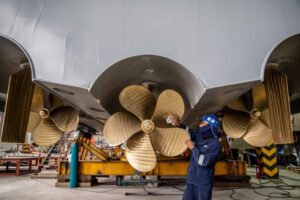 The attack was one of nearly 70 incidents that occurred during the first half of 2021. That’s a decrease over the same period in 2020, but the number of kidnapped sailors continues to be a concern, and remains at close to the highest level seen in the past decade, according to the International Maritime Bureau.

Piracy might be pervasive, but it remains geographically restricted. Nearly half of these pirate attacks and attempted attacks in 2021, including the one on the MV Mozart, occurred in and around the Gulf of Guinea.

Our research shows that contested maritime boundaries are partly driving the location of sea piracy. Here’s why.

We examined the maritime hot spots

Pirate groups from five countries account for more than 60 percent of the total pirate attacks between 1995 and 2017, we found — and nearly 75 percent of the more sophisticated attacks against steaming ships. Economic deprivation explains much of what drives piracy in these five countries: Somalia, Bangladesh, Indonesia, Malaysia and Nigeria.

Poverty and joblessness are widespread, yet the locations of pirate attacks tend to be highly contained. For example, thousands of vessels transit the Singapore Straits each year, making it one of the busiest sea lanes in the world and, consequently, a frequent location for maritime crime. Pirates look for rich “targets of opportunity,” such as shipping lanes, geographic chokepoints and ports, but this isn’t enough to explain the geography of sea piracy.

Why would pirates attack along these contested boundaries? In the 21st century, pirates and other maritime criminals understand that they can exploit the fear of conflict escalation between countries to dodge government security personnel.

Coast guard forces and maritime police hesitate to enter the territorial waters of neighboring nations since such maritime trespassing might lead to diplomatic crises or standoffs, especially between governments that already dispute local borders. That’s what’s going on in the Gulf of Guinea and in Southeast Asian waters.

Pirates are also likely to attack closer to countries with weaker law enforcement capacity. It is no accident that most incidents of piracy occur in the eastbound lane of the Singapore Straits, which sits closer to Indonesia’s Riau Islands. Attacks in this area are less likely to attract maritime patrols from Singapore, which has more capacity to crack down on illegal activity.

Why aren’t countries working together on piracy?

Under international law — the U.N. Convention on the Law of the Sea, Article 111 — coastal nations can extend their jurisdiction beyond their own maritime border to pursue and seize any vessel involved in illicit activities. The chase must begin in the territorial waters (or contiguous zone) where the illegal activity took place and continue into international waters.

But once the pirate vessel crosses into another country’s territorial waters, the hunt must end. At that point, the law enforcement ship must turn back unless bilateral or regional agreements sanction cross-border pursuit. In areas where maritime conflict prevails, such agreements are unlikely. While a country may want to secure maritime trade routes, countering maritime crime is costly and the conflict over maritime boundaries is often more salient to overall security interests. So governments frequently ignore maritime crime and focus on rival neighbors.

For this reason, countries locked in maritime conflict fail to pursue pirates and other maritime criminals effectively. In 1992, for example, the Royal Malaysian Police Marines chased a suspected pirate vessel out of Malaysian waters. Rather than follow the ship into Filipino maritime space, the Malaysian captain opted to return to Malaysian territorial waters. A 1994 agreement between Malaysia and the Philippines allowed for coordinated patrols in Sulu and Celebes Seas, but only along their shared maritime boundaries, while cross-border pursuits remained prohibited.

Cooperation will be key to tackling piracy concerns

What does our study mean for maritime security in the Indo-Pacific, and for U.S. counter-piracy operations? Our research suggests that maritime crime can thrive where nations are locked in contention and local law enforcement remains limited. Further, it’s unlikely that countries in the Indo-Pacific region will be successful at reducing sea piracy single-handedly.

That’s a prime reason the U.S. Navy trains annually with militaries and coast guards throughout the region and the U.S. State Department has increased infrastructure assistance to help combat illegal fishing. And USAID’s Indo-Pacific Transparency Initiative, aimed at strengthening political institutions, is another area of increased assistance to the region.

Formal military agreements, training opportunities and joint action with other countries may help address global piracy. Information sharing through ASEAN, along with confidence-building measures to shared patrols, have also proved effective at preventing maritime crime. The absence of such cooperation will only push illegal activities across maritime borders.