Home » Finally, Egypt Agrees To Release Ever Given From Suez Canal

Finally, Egypt Agrees To Release Ever Given From Suez Canal

The long-running dispute about the release of Ever Given (IMO: 9811000) has been resolved and the vessel will resume its voyage this week, more than three months after the incident that blocked the Suez Canal. 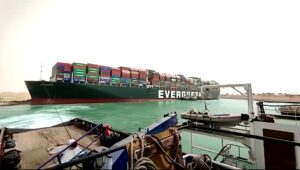 “Following the agreement in principle between the parties, and after further meetings with the Suez Canal Authority’s negotiating committee and numerous court hearings, good progress has been made and a formal solution has now been agreed,” the UK P&I Club, the vessel’s insurer, said in a statement.

“Preparations for the release of the vessel will be made and an event marking the agreement will be held at the authority’s headquarters in Ismailia in due course.”

Reuters reports that the SCA will sign the settlement contract on July 7, allowing the ship to resume its voyage. No details of the final settlement were given.

An agreement in principle was reached between the vessels owners and insurers last month,

The SCA lodged an initial demand for more than $900m in compensation, including $300m for a “salvage bonus” and a further $300m for “loss of reputation”.

That was later cut to around $600m, and has also indicated that it would allow Ever Given to proceed on payment of security in the order of $200m.

The 20,000 teu boxship has been under arrest in the Great Bitter Lake since grounding caused a six-day shutdown of the key waterway in March.

As soon as the SCA allows the vessel to depart, it will proceed to Port Said to undergo reinspection by ABS before completing her voyage to Rotterdam.

For shippers with goods on board the vessel, the agreement will at last see the resumption of deliveries that were due to arrive many weeks ago.

But on top of the long delays to their cargo, shippers now also have to pay deposits before their cargo is released. General average has been declared, meaning that cargo interests are liable to contribute towards some of the costs of the salvage.