FRONT PAGE COMMENT: Hassan Bello To Maritime Industry: My Successor Jime Is ‘A Man Of Steel’

The gathering was exclusive; the setting was equally cozy. Even though it was organised for an accomplished maritime administrator, the event was hosted far from the maddening and hustling characteristic of the port city of Apapa.

Occasion was the lunch that was organised in honour of the immediate past Executive Secretary of the Nigerian Shippers’ Council; Barrister Hassan Bello. 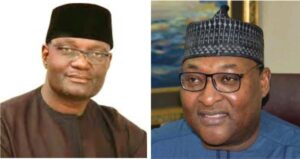 For weeks, a group of senior maritime journalists who pride themselves as ‘Friends of Hassan Bello’ brainstormed over how best to show appreciation to a man whose path crossed many in diverse ways while he was the CEO of the Shippers Council.

As journalists, the choice was between holding a colloquium and private exclusive lunch. After days of back and forth, the overwhelming decision was the former.

And because, he has many friends, the other issue is about who and who to invite without ‘offending some’. Eventually, the lot fell on his successor; Mr Emmanuel Jime who eventually graced the day to witness how his predecessor; Hassan Bello was celebrated by the least expected group; the media.

And taking advantage of the occasion, being the new Shippers Council CEO’s first encounter with the maritime media. Hassan Bello gave an inkling about the content of his successor’s quality. Bello described his successor; Jime as a ‘Man of Steel’, with immeasurable qualities and stupendous wealth of experience, from which the nation’s maritime industry truly stands to gain.

Characteristically, not dwelling on his own achievements while in office, Bello pointed out that Jime was twice a member of the House of Representatives, former CEO of Nigeria Export Processing Zone Authority (NEPZA) and Speaker of the Benue State House of Assembly.

Humbly, he said: “My successor is a man of steel, a man who has valued experience that I can never dream of. He will perform more than all of us put together (referring to past Executive Secretaries of NSC). I assure you that he is going to do that”.

It is also quite instructive that, Jime assured that he would continue with all the programmes which Bello promoted while in office.

He specifically identified the International Cargo Tracking Network (ICTN), among others as very critical for the good of the industry, even as he acknowledged that the Nigerian Shippers’ Council has a good foundation.

As stated by Bello, it is true that the Council has always been lucky to have wonderful CEOs who have performed creditably during their tenure in the Council.

While recommending a robust media relationship for his successor, Bello described the media as critical to economic and political development of any nation. He specifically called on the maritime media to extend the same level of cooperation given to him when he was in the Council, to his successor.

As discrete as the organizers made the event to be, the founder of the National Association of Government Approved Freight Forwarders (NAGAFF), Dr. Boniface Aniebonam took the pain to attend. He was specifically invited.

He commended the ‘Media Friends of Hassan Bello’ for the honour bestowed on him, adding that it was a wonderful thing to come from journalists in the industry. He stressed that it was a honour that every former chief executive officer would wish for.

Read Also:  We Are 100% Ready For Take-off Of New Guidelines For Barge Operations – BOAN

Aniebonam’s presence added to the growing list of friends that Jime is cultivating. The NAGAFF Founder had earlier registered his association’s displeasure with the new Executive Secretary for not honouring NAGAFF’s invitation for a similar event in the past.

But, while giving a brief address towards the end of the event, Aniebonam disclosed that he (and NAGAFF) now has a change of mind, and have taken Jime as a friend.

He explained that he was doing so based on every indication that Jime is a good man and will impact positively on the industry.

Tags: Hassan Bello To Maritime IndustryJime Is ‘A Man Of Steel’