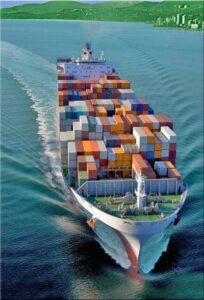 “We expect a surge of containers onto the transpacific, leading to higher utilization of vessels on this route. We could see a surge in spot rates especially with the upcoming peak season.” said Christian Roeloffs, cofounder and CEO, Container xChange.

“Not only Shanghai was in lockdown, right now Beijing and its biggest harbour Tianjin is still in lockdown. All cities are so interlinked that it influences the whole of China. For instance, Shanghai is the main hub to produce car parts and Shenzhen is for assembly. Since no parts are dispatched to Shenzhen, nothing can get assembled and thus exports out of Shenzhen also experience slow down.”

“If we look at the west, there is major congestion in Los Angeles and Houston. It has become particularly challenging to find open depots and moving units in Shanghai. Depots in Rotterdam are also quite full, followed by Hamburg (but less flagrant than Rotterdam).”

“We saw a decrease in pick up charges in the past months in China because there was a lack of demand for containers there. In the short term, we expect a spike in container prices because the demand (the pent-up demand) for containers will shoot up especially because we have the peak season coming up.

“However, in the mid to long term, we do expect container prices to go down, containers availability to go up and container turnaround times to normalise because we expect the supply chain disruptions to ease.” said Roeloffs.

“A metric cited by Goldman Sachs shows goods consumption about 5 percent higher from before the pandemic, down from a peak gap of 15 percent. However, the demand side was never really the massive driver of the price increase on the rates. Owing to the supply chain shocks, the containers just took much longer than before and hence there was just not enough supply of containers which coupled with a little bit of an increase in demand and led to this situation that we faced. So, I don’t think that slight reduction in demand will be a massive driver of market changes but of course, it will contribute.”

“To sum up, I think the consumer demand (and eventually presumable unprecedented container demand) wasn’t the biggest driver of the destabilization of market, but it was rather a sort of supply shock and that there were just not enough boxes to go around and because they took longer to move from A to B.” said Roeloffs