The ongoing war in Ukraine, sharp rises in global energy and food prices and spiralling rates of inflation continue to have a negative impact on the container shipping industry with the trading outlook for 2023 deteriorating further. Moreover, with supply chain congestion easing, the surplus amount of equipment that has built up in the fleet over the past two years is being removed. As a result, the fleet of container equipment in service is forecast to decline by 3% in 2023, according to Drewry’s recently published Container Equipment Forecaster. 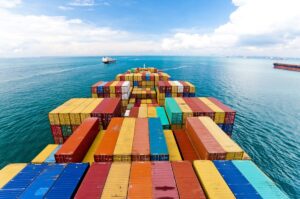 These factors mean fewer shipping containers are needed and this at a time when surpluses of over 6 mteu are estimated to be in the fleet, according to Drewry’s latest assessments published in its Container Equipment Forecaster. This stems from the record number of new containers delivered in 2021 when over 7 mteu was produced and lessors and ocean carriers refrained from retiring older boxes because of congestion issues.

Ageing containers are now being sold into the secondary market at an accelerating pace as both ocean carriers and, particularly, lessors address overcapacity and organise their container pools so that they are brought back into line with existing and short-term demand and vessel capacity projections. Since the summer, there has been a notable increase in equipment being off-hired and returned to lessors as shipping lines have not renewed and/or extended their contracts. This will continue into 2023 with lessors streamlining their fleets accordingly.

Lessors are also being impacted by decisions of ocean carriers to directly own more of their equipment. Year-to-date, close to 70% of dry freight containers delivered have been for the accounts of transport operators, a total reversal in the trend of the past decade when lessors dominated the orderbook.

Read Also:  Half Of The Vessels Ordered By Danish Shipping Companies Can Sail On Green Fuel

With factory stockpiles of empty containers in China rising to more than 750,000 teu by the end of September and likely to increase further, the appetite to order new containers is extremely weak. Orders placed for 4Q22 deliveries are reported to be very low with several factories in China still closed after the national holidays in early October and others cutting their working shifts. These new working patterns are expected to remain in place until after the Chinese New Year (January 23, 2023).

Drewry forecasts that production will fall drastically in 2023 as few owners are expected to expand their fleets and not every container being retired will be replaced with a new one. Globally, the pool of equipment in service will decline from 50.8 mteu in 2022 to 49.3 mteu in 2023 and production slump to an estimated 497,000 teu, a number only slightly above that recorded in 2009, following the global financial crisis. The 3% projected decline in next year’s global fleet will represent the first such contraction since 2009, some 14 years previously.

Thereafter, Drewry expects the market to rally and annual newbuild output to recover to the 4.4-5.2 mteu range over the period to 2026, with replacement requirements accounting for over 50% of production in all years. And after that 3% decline in the fleet in 2023, the global pool of equipment is forecast to start expanding again, returning to trend growth.