REEFER – Refrigerator ship; a vessel designed to carry goods requiring refrigeration, such as meat and fruit. A reefer ship has insulated holds into which cold air is passed at the temperature appropriate to the goods being carried. 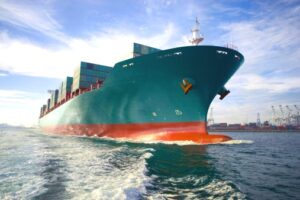 REEFER BOX – An insulated shipping container designed to carry cargoes requiring temperature control. It is fitted with a refrigeration unit, which is connected to the ship’s electrical power supply.

RETURN CARGO – A cargo which enables a ship to return loaded to the port or area where her previous cargo was loaded.

ROLLING CARGO – Cargo which is on wheels, such as truck or trailers, and which can be driven or towed on to a ship.

Read Also:  IMO Leads Support For Maritime Security In The Gulf Of Guinea

RO/RO SHIP – Freight ship or ferry with facilities for vehicles to drive on and off (roll-on roll-off); a system of loading and discharging a ship whereby the cargo is driven on and off on ramps. Equipped with large openings at bow and stern and sometimes also on the side, providing easy access. Fully loaded trucks or trailers carrying containers are accommodated on the deck.

SALVAGE – The property which has been recovered from a wrecked vessel, or the recovery of the vessel herself.

SEABEE – Sea-barge, a barge carrier design similar to “LASH” but which uses rollers to move the barges aboard the ship; the self-propelled loaded barges are themselves loaded on board as cargo and are considerably larger than those loaded on LASH ships.