South Korean shipbuilder Hanjin Heavy Industries and Construction has secured a $270m contract for the construction of four container ships. 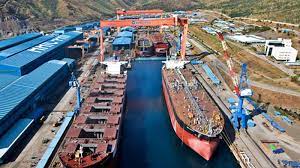 These 5,500TEU vessels will be built for an undisclosed Europe-based firm.

In a regulatory filing, the company said that these vessels will be delivered by November 2023.

Featuring an eco-friendly design, the vessels are expected to increase energy savings and cut down greenhouse gas emissions.

The deal happens to be Hanjin Heavy’s first contract since 2015 for a general cargo ship, reported ANI news agency.

After signing a debt restructuring agreement with creditors in 2016, the company has been focusing on military vessels and other special-purpose ships.

In September last year, the shipbuilding company was put up for sale as it was struggling with financial problems after its Philippines-based Subic shipyard incurred massive losses over the last few years.

In April, the company’s creditors, led by the state-run Korea Development Bank (KDB), signed a deal with a consortium led by local builder Dongbu to offload a 66.85% share in Hanjin Heavy.

The shipbuilder is now aiming to re-enter the commercial shipbuilding market with vessels equipped with eco-friendly technologies.