Despite numerous forecasts that freight rates are or have peaked, German carrier; Hapag-Lloyd is raising its outlook for the year. Analysts are calling the forecast extraordinary profits after Hapag and other major carriers had previously said that they expected the markets would normalize in the second half of 2022. 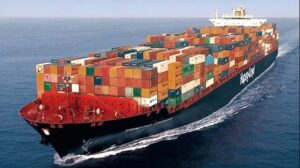 “Based on current business performance, the second half year should also exceed previous expectations. Against this background, the Executive Board of Hapag-Lloyd AG has raised its earnings outlook for the current financial year today,” the company said in an announcement to investors.

Demonstrating the continued strength in the market, Hapag reports that the average freight rate increased by approximately 80 percent in the first half of 2022 versus the prior year. Volume also remained strong at around six million TEU but was basically flat year-over-year.

Based on these continuing strengths in the market, Hapag announced preliminary figures for the first half of 2022. The carrier is reporting that first-half profits will be approximately three times ahead of 2021, reaching more than $9 billion (EBIT). In the first half of 2022, Hapag is projecting that it has produced a profit equal to 85 percent of its profit for all of 2021.

The company however is sounding a caution for the remainder of the year, noting continuing issues that might impact the market. They said, “In view of the war in Ukraine, the continuing disruptions to global supply chains, and the effects of the COVID-19 pandemic, the forecast is subject to considerable uncertainty.”

Most analysts consider Hapag’s management to be among the most conservative in the shipping industry. The preliminary announcement highlighting the strength of the first half and raising the outlook for the remainder of 2022 is setting the tone for the industry which has already received a lot of attention for its extraordinary profits. Hapag-Lloyd said it will release its half-year results on August 11, and provide more details on its performance and outlook.