Checks by Shipping Position Daily have revealed how in-fighting and lack of understanding between the Ministry of Transportation headed by Mr Rotimi Amaechi, and the Ministry of Finance led by Zainab Ahmed may have dashed ship owners’ hope for disbursement of the Cabotage Vessel Financing Fund (CVFF). 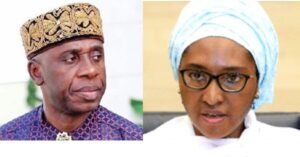 This is even as the Minister of Transportation has vowed not to pursue the disbursement of the fund anymore.

The CVFF which is a component of the Cabotage Act, came into being in 2004, and it is collectable from ship owners as two percent deductions from every contract value awarded under the Cabotage regime.

Ship owners are expected to access the CVFF so as to purchase of new vessels and also maintain the existing ones.

Shipping Position Daily recalls that Amaechi while speaking at a stakeholders’ appreciation night organized by the Nigerian Shippers’ Council in 2019 had promised the ship owners of disbursement of the CVFF, stating that his ministry had finally received the approval of President Muhammadu Buhari to commence the disbursement of the fund by January 2020.

While speaking at the Federal Ministry of Transportation’s 2021 ministerial retreat in August, Amaechi had again said that, President Buhari and the Attorney-General of the Federation, Abubakar Malami, have approved the disbursement of the fund, but said the Minister of Finance, Zainab Ahmed, protested against its disbursement, saying public fund shouldn’t be disbursed to private operators.

The minister said: “the President made approval saying go ahead and disburse, and the Attorney-General said go ahead, the law says it is a private fund, but the minister of finance, Zainab Ahmed protested that it is a public fund and cannot be spent, so what will I do?” Amaechi had asked rhetorically. While advising ship owners to write a protest letter to the president, seeking the disbursement of the fund and explaining why the fund is a private fund.

However, sources hinted our correspondent that the two Ministers are at loggerhead as to who has the ears of the President regarding the state of the fund which is in excess of US$200Million.

While Amaechi claimed to have received go-ahead from the President on disbursement, Ahmed however may have convinced the President as to why the fund should not be disbursed, which made the Minister of Transportation at a recent function in Lagos to have said that he would not pursue the disbursement anymore.

However, in a chat with the President Shipowners Association of Nigeria (SOAN) Mr. MkGeorge Onyung, he argued that the law is clear about the CVFF and added that the National Assembly is in the best position to give directives about how the CVFF is to be handled.

He also stated that the Minister of finance’s statement that the CVFF is Nigeria’s money shows she does not understand what the law backing the CVFF is all about.

“The Maritime industry is just making the whole thing seems like we are just joking here. Do we need to sing a song? We have been singing it for about 18 years. The law is clear about what it is.

“There will be a public hearing next week in Abuja on the CVFF. If the minister doesn’t understand and he is saying that the CVFF is Nigeria’s money, I think the lawmakers do know and are being informed that some people are now toiling with the law backing the CVFF.

“Where is the CVFF coming from? The CVFF is contributed by ship owners who are paying two percent of their money to the fund or the contract. One of our members is making one trillion dollars in Africa and 14 trillion dollars in the whole world” Onyung said.

On his part, Engr Greg Ogbeifun, a ship owner and chairman of Starzs Marine and Engineering Ltd. noted that he has not seen any confirmation as regards the President’s stoppage of the CVFF disbursement, even as he stated that he is yet to believe that the Minister made such declarations.

“I do not have a confirmation of the President withdrawing the CVFF disbursement. Although, I read in the news that the Minister said so, but I do not believe it. That information makes no sense. Since I didn’t hear it from the Minister, I think it is definitely a misrepresentation. I don’t believe it”, Ogbeifun said.

The Africa Centres for Disease Control and Prevention says over 255,000 people have died from COVID-19 in the African continent...