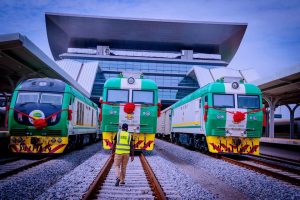 The Chairman, ICPC, Prof. Bolaji Owasanonye, supervised the formal inauguration of the unit in the NRC Lagos office on Tuesday.

Owasanonye, who was represented by the Lagos Resident, Anti-Corruption Commissioner, ICPC, Mr Kabir Elelu noted the unit was established because the commission expected international best practices from the corporation.

The chairman said, “The unit was formed because we expect international best practices from Nigeria Railway Corporation and it must also meet the yearning and demand of travelers and every critical patron of your service.

“The directive to establish the anti-corruption transparency unit was given to all Ministries Departments and Agencies (MDAs).

“The unit was intended to complement the work of the ICPC in preventing corruption in MDAs.

Owasanonye urged members of the newly inaugurated unit to use the platform as a turning point in making the NRC achieve its desired objectives.

Okhiria said this would be done especially in the provision of the required necessary resources to see the functionality of the unit.

He therefore tasked the unit committee to replicate and rededicate itself to duty with high sense of responsibility and commitment as done by the outgoing committee.

The managing director urged the staff to corporate with the unit to achieve a corruption-free organisation.