A new study conducted in Korea has identified a possible link between increased alcohol intake and alcohol-related cancers and all cancers. 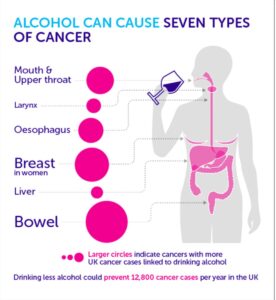 The Korean researchers said they discovered that individuals who increased the amount of alcohol they consume had a higher risk for alcohol-related cancers and all cancers in comparison with those who had sustained levels of drinking.

They also discovered that the risk increased for non-drinkers who changed their lifestyles and became mild, moderate, or heavy drinkers.

The population-based cohort study made use of data from over 4.5 million insured participants aged 40 years old and above.

The participants of the study were from the Korean National Health Insurance Service, had undergone a national health screening in 2009 and 2011 and had available data on their drinking status.

Findings from the study published in the JAMA Network Open revealed that those who increased their drinking from being non-drinkers had a high occurrence of stomach, liver, gallbladder, and lung cancer, multiple myeloma, and leukaemia.

The researchers also found a link between reducing heavy drinking to moderate or mild levels and decreased risk of alcohol-related and all cancers.

The study authors from the Seoul National University Hospital said, “In this large cohort study that used repeated measures of alcohol consumption, we found that individuals who increased their alcohol consumption, regardless of their baseline drinking level, had an increased incidence of alcohol-related and all cancers compared with those who sustained their current level of drinking.

“We also found an elevated risk for all cancers among participants who recently quit drinking compared with those who sustained their level of drinking.

“Quitting drinking was associated with increased risk, but this risk increase disappeared when quitting was sustained,” the authors said.

The study however had several limitations such as the possibility of women underreporting their alcohol consumption in the self-administered questionnaires; authors not having information about participants’ long-term alcohol intake habits and authors not being able to find out reasons for reducing or stopping drinking and duration of drinking.

In addition, it also lacked information on other healthy behaviours that could have occurred alongside reductions in alcohol intake, so the changes in risk may not be attributed entirely to alcohol use.

“Alcohol cessation and reduction should be reinforced for the prevention of cancer,” the study authors, however, stressed.

According to the Centers for Disease Control and Prevention, the less alcohol you drink the lower your risk for cancer.

“All alcoholic drinks, including red and white wine, beer, and liquor, are linked with cancer. The more you drink, the higher your cancer risk,” it said.