Israel has opened a new shipping port along its Mediterranean coast that will bring much-needed competition to a sector plagued by delays and boost the country’s standing as a regional trade hub. 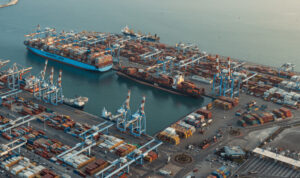 The 5.5 billion shekel ($1.7 billion) Bay Port at Haifa, which will be operated by Shanghai International Port Group (SIPG), will enable larger classes of cargo ships, carrying 18,000 containers or more, to dock in Israel.

The country is selling its state-owned ports and building new private docks in an effort to bring down costs and cut above-average wait times for vessels to unload. About 99% of all goods move in and out of Israel over the sea and an upgrade is needed to maintain economic growth.

“I’m sure we can leverage this opportunity not just for local prosperity, but for realizing opportunities and making a real contribution to our neighbors in the Middle East,” Transport Minister Merav Michaeli said in a statement after the port was inaugurated in a low-key ceremony on Wednesday.

Another new port on the Mediterranean coast is due to open in Ashdod by the end of the year, to be operated by Swiss-based Terminal Investment Limited.