An aging bulker and its crew have been abandoned off of a far-flung foreign port, according to the International Transport Workers’ Federation, and this particular case is worse than most: the location is inside of the Somali piracy high-risk zone, and the vessel is actively taking on water. 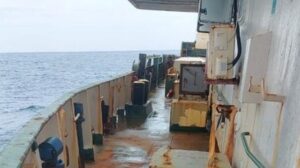 According to ITF, eleven seafarers are trapped aboard the 1977-built Haj Abdullah (IMO 7702114), and the ship is unable to leave an anchorage off Mogadishu. Only her bilge pumps are keeping her afloat.

The 44-year-old bulker developed cracks below the water line as she was transporting a cargo of sulfur from Dubai to Dar es Salaam, Tanzania. On August 31, the Haj Abdullah called at Mogadishu for an inspection and for supplies. However, the port authorities would not allow the ship into the harbor and insisted it remain anchored off the coast. The crew has been there ever since, ITF reported, stuck on a vessel that cannot be repaired with the resources on hand.

“The seafarers have been pumping out water day and night to keep her afloat,” said Mohamed Arrachedi, Arab World and Iran Network Coordinator for the ITF. “Food and water will run out in a day or so. The international community still considers the coast off Somali to be at high risk of piracy. The crew is in an extremely perilous situation.”

The 11 crewmembers have also gone unpaid for about 4-6 months, ITF says, and the vessel’s Lebanese owners have reportedly not responded to inquiries. The vessel’s flag state, Sierra Leone, ranks among the lowest-performing registries in the world for port state inspection quality – second to last on the Tokyo MOU black list – and while the flag’s administrator told ITF that it is investigating, the union asserts that Sierra Leone has taken no practical steps to help.

“We all fear for our lives stuck here at anchor,” one crew member told the ITF. “At the moment the pumps are coping but we have no way of knowing how long the ship may stay afloat until we can get the hull inspected. It is a very frightening situation.”

The ITF has contacted the insurer, P&I club Thomas Miller, to use the MLC financial security clause for vessel abandonment in the ship’s insurance. This would give each crewmember up to four months of back pay and would cover the cost of their repatriation. However, without cooperation from the Port of Mogadishu, ITF says, there is no way to get the crew home.

“There are clear obligations to ships’ crews like the Haj Abdullah. These seafarers need food and water now, and they need the safety of the ship to be addressed urgently,” said Steve Trowsdale, the ITF’s Inspectorate Coordinator. “They also need their outstanding wages. They have been abandoned by the owners and now the duty to act falls to the flag and port states.”