A special joint military forces have busted a syndicate allegedly siphoning crude oil from the Chevron/NNPC rigs on the high sea in Ondo State. 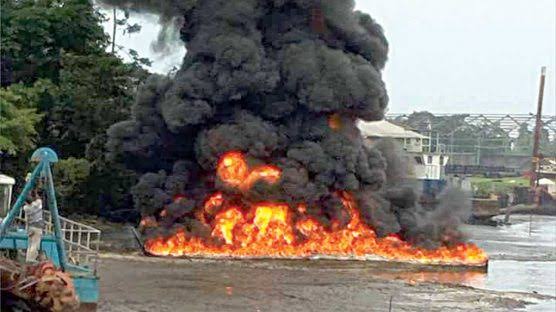 The special joint forces included, men of the Nigeria Army, Navy, the Nigeria Security and Civil Defence Corps and the men from a private security- the Galaxy Security Services.

It was gathered that two monster boasts used by the syndicate, for their illicit operations, were hidden at different locations within suspended residential raft houses at Awoye Community in Ilaje Local Government Area of the state.

Speaking on development, one of the Ondo Niger Delta leader and Chief Executive of Galaxy Security Services, High Chief Bibopere Ajube, said the forces tracked the evacuation points of the bunkering syndicate within elephant grasses.

According to him, through intelligence gathering, the forces were able to track down the rigs from which the syndicate siphoned illegal crude oil which were on the Atlantic Ocean.

He said, “We are making efforts to stop bunkering in our state and in the Niger Delta as a whole, though this is tedious and requires a lot of funds to do in terms of fueling the boats and staying on water for several hours to checkmate the perpetrators.

“Here in Ondo State, we talk to our youths not to engage in illegal businesses, we encourage them to exert their energy in businesses that would earn them a living without security agents chasing them around.

“It is unfortunate that people engage in bunkering, a development which has drastically reduced the country’s earning and had forced the government to go into borrowing. Our people need to stop this act for our economy to improve through more earnings from the crude oil sales.

“On this discovery, we will have to inform the appropriate quarters to the rigs fixed with a view to preventing the perpetrators from continuing their illegal activities.”

It was learnt that the team towed the two monster boasts from Awoye Community to another location within Ilaje Local Government and set them ablaze with the products inside them.