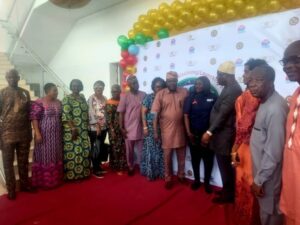 LASCOMED’s President, Mrs Mosidat Oshodi-Bakare, during the launch at the Lagos State Waterways Authority (LASWA) jetty in Falomo, said that the ferries were locally built.

Oshodi-Bakare said the ferries were certified safe and registered with LASWA, ready to ply the waterways to convey people from Ikorodu terminals to Falomo.

She noted that the ferries would not only ease traffic situation in Lagos but also would ease stress being expedienced by workers and residents.

“This investment in water transportation was undertaken because of the challenges of heavy traffic that most workers face on our roads.

“This project was completed without a bank loan and we are going to launch more initiatives very soon for the good of our members.

“The boats are with twin imported engines and comfortable overhead roof,” she said.

Oshodi-Bakare said that the initial plan was to get six boats, saying that more would be added in the nearest future.

She disclosed that plans were on the way to buy BRT buses.

According to her, the society had done alot to make life better for Lagos residents as accommodation spaces had been created on 40 hectares of land in Ikorodu for the members.

She appreciated Gov. Babajide Sanwo-Olu of Lagos State for the inspiration and encouragement enjoyed so far.

“It is a pleasure that the cooperative society is working in line with Gov. Sanwo-Olu’s THEMES agenda.

“This is a laudable project, we are encouraged and hope that other cooperative societies will follow suit because this investment will yield good returns and contribute to the economic growth of the state.

“This will bring succour to the teeming masses in the state, so we inaugurate this to the glory of God and benefit of man,” he said.

Chief Tajudeen Ayeola, President, Cooperative Federation of Nigeria, commended the initiative, describing it as a value added service which will greatly benefit the members and Lagos residents.

Ayeola noted that the core responsibility of cooperative societies was to improve the welfare of members.

“I am happy this is happening during my tenure, we want other societies to key into this avenue to raise more funds which would go back to members as dividends, with this, the society will be better for it,” he said.