The Lagos State Waterways (LASWA) has pledged to donate boat lifejackets to Jagaban Maritime Network to enhance safety on waterways. 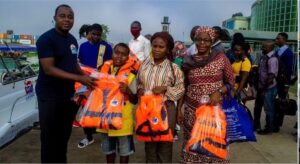 The General Manager, Mr Oluwadamilola Emmanuel, made the promise during a Town Hall meeting with the theme: “Maritime for Asiwaju Day Towards the Forth Coming Election,” held in Lagos on Thursday.

He said that many states across the country had been seeking support from Lagos State on how to improve their states’ water transportation.

Emmanuel said that it would have not been possible for the states seeking support without the legacy and foundation laid by Bola Ahmed Tinubu, the former Governor of Lagos State.

“Lagos State has built more than five terminals with more than 40 jetties, donations of free standard lifejackets to jetties from time to time.

“We are working towards replicating inland structure on national level to Lagos State because of the increase in population on daily basis.

” Lagos State Government will like to make commitment to support Jagaban Maritime Network towards office and providing boats to enhance their ports operations because your safety is our concern.

“I use this opportunity to commend our leader Asiwaju who had strategy to manage Nigeria and I also commend Gov. Babajide Sanwo-Olu, for being a listening leader, otherwise we can not achieve much,” Emmanuel said.

He said that the State Government had done a lot to stop constant gridlock along Apapa port area which many people could testify to.

Emmanuel said Tinubu was aware of challenges facing port operators, adding that he would solve them on getting to the federal level.

Adefioye said it was a coalition of people and maritime stakeholders to join Tinubu to lead the country.

“our members are all registered APC members spread in all Nigeria seaports, airport, land boarders and riverine areas with over 10,000 membership strength and more than 5 million votes.

“We are grassroots mobilisers as we have intensified our sensitisation campaign to all the transport sector, including air transport, to vote for APC and if elected will turn things around positively.

“We are requesting for three things such as suitable Secretariat, two local boats, one of the boats will ply Apapa to Ikorodu while the second boat will ply Tincan port to Badagry,” Adefioye said.

He said that the third request was to include their members in the campaign structure from national, state and local government levels.

The Deputy National Coordinator (South), Tinubu support Organisation, Mrs Ayodele Fatusin, noted that they had the best leader coming from the south.

She said nobody was competing with Tinubu, adding that they were on ground and he would become the president by the special grace of God.

Fatusi said that APC was still the best party in Nigeria to vote in, adding that Tinubu would come up with updated policies that would suit the economy.

“All we are asking for is for Nigerians to vote for Asiwaju Bola Ahmed Tinubu who is capable with versatile experience to move the country forward.