The Lagos State Ferry Service Company (LAGFERRY) has rewarded another 22 passengers, to encourage residents to patronise water transportation in the state. 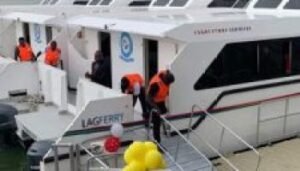 The Managing Director of LAGFERRY, Mr Ladi Balogun, presented various items to the winners, who emerged in the Sailing’ N Smiling Promo raffle draw, at the Ojo Ferry Terminal in Lagos on Friday.

The News Agency of Nigeria (NAN) reports that the promo was launched on June 10 to reward loyal LAGFERRY passengers, and the inauguration held at Falomo Jetty Terminal, Lagos on July 1.

Balogun said that all 16 jetties across the state would be involved in the promo, which was to boost patronage and popularise water transportation in order to decongest traffic on the Lagos roads, since it was safe and faster.

“We will keep sailing and smiling, courtesy Lagos State Waterways Authority, LAGFERRY and other organisers. This promo was initiated to allow us encourage residents to come on the waterways.

“We are glad that since last week Thursday that the promo news broke out, we have witnessed tremendous improvement in our ridership.

“Last week we were at Falomo terminal and today we are at Ojo terminal; by next week Friday we are moving to CMS-Marina terminal.

“Twenty-two people won the raffle draw prize today at the Ojo terminal as against 20 that won at the Falomo, and by the time we go to CMS terminal next week Friday, the winners will increase.

“The essence of the promo is to reward our passengers and to encourage more people to come on the waterways,” he said.

Balogun said the improvement in ridership showed that the initiative was actually hitting the right target.

He said that the grand prize, which is a brand new car, would be won at the end of September, noting that there would still be second, third and fourth stages of the promo.

The managing director lauded the support and passionate commitment of Gov. Babajide Sanwo-Olu for giving them the platform to showcase what the state could do with the waterways.

He said, “This platform has enabled us to exploit the potential the state has on the waterways and the water body which constitute one-third of the state landmass.

“The promo was initiated to bring more Lagos residents on the waterways so we can be able to decongest traffic on the road.

“In addition, the cowry cards have been deployed to all our jetty terminals to enable passengers to use it to make their payment.”

The winner of the washing machine, Mr Clement Olaniyi, urged Lagos residents to patronise LAGFERRY, saying that water transport was safe and faster.

Mr Ayo Akinwande, who won a life jacket, thanked the organisers, urging them to improve on the safety of the waterways.