The Minister Of Transportation, Mu’azu Jaji Sambo, has described the Lekki Deep Seaport as one of the major legacies of President Muhammadu Buhari’s administration. 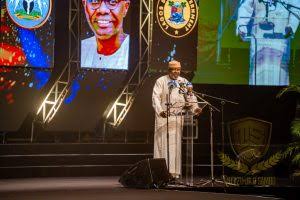 The minister said this at the state banquet in honour of President Muhammadu Buhari by the Lagos State Government at the inauguration of the Lekki Deep Seaport.

In statement signed by Dr Sam Idiagbonya, Special Assistant to the minister on media and publicity on Tuesday in Lagos, Sambo said the inauguration was possible by the President.

According to him, the expedited manner in which the President handled all requests made by the Federal Ministry of Transportation concerning Lekki Deep Seaport is commendable.

“This project will go down as one of the major legacies of this administration. In addition, this project will make an immense impact on the nation’s economy, generating about 350 billion dollars in revenue.

“I, therefore, say big congratulations to Mr President, the Federal Ministry of Transportation, the Nigerian Ports Authority, the investors and all stakeholders on the accomplishment of this milestone,” he said.

He added that the letter of intent between the proponents of Lekki Deep Seaport and its financial partners was signed as recently as April 2019 and by January the wide-ranging impact project was already inaugurated.

He noted that it was a testament to the tenacity of the purpose of the Federal Ministry of Transportation through the Nigerian Ports Authority.

“Added to these was the unprecedented promptness with which the President approved the Ministry’s extraordinary request to designate Lekki Deep Seaport as Customs Port and approved Wharf and its publication in the Federal Government Official Gazette in record time.

“With Seaports being under the exclusive legislative list, the NPA’s provision of a sinking fund for Lekki Deep Seaport Federal Government’s equity contribution gave this project the necessary statutory cover and financial guarantee in line with the law.

“Completing a project of the magnitude and impact of a deep seaport in a record time of 45 months shows the effectiveness of tenacious ministerial supervision, strict regulatory oversight and strong presidential backing,” he said.

He said one of the features of Lekki Deep Seaport is its full automation which would enhance the competitiveness of Nigeria’s exports in the international marketplace.

“Given the thousands of direct and indirect jobs that Lekki Deep Seaports has generated from the commencement of construction to date and the over 170,000 jobs, it is set to create as operations commence.

“The distinctive features of Lekki Deep Seaport such as full automation which positions it for quick cargo and vessel turn-around will greatly enhance the competitiveness of Nigeria’s exports, especially agro-allied products in the international marketplace.

`It will position Nigeria to maximize the opportunities inherent in the African Continental Free Trade Area (AfCFTA) Agreement.

“I am very delighted to be a part of this epoch-making occasion and I want to join the rest of Nigeria to commend Mr President for placing Nigeria on the global list of nations with deep seaports,” he said.