The management of the Lekki Deep Sea Port has thwarted all plans by Truck Transit Parks (TTP) Limited, operators of the electronic call-up system in Apapa and Tin Can ports, to manage traffic at the deep seaport. 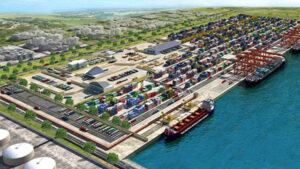 Also, stakeholders in the haulage and logistics sector have expressed divergent views over TTP’s operation at the deep seaport.

Speaking exclusively to Shipping Position Daily, the Head of operations, Truck Transit Parks (TTP), Mr Irabor Okonoman informed our correspondent that the management of TTP has been making plans on seeking approval from the state government and relevant authorities to begin their operation at the Lekki Deep Seaport and also Badagry Deep sea port when it finally comes into full operations.

“We are speaking with the relevant authorities, the Lagos state government and everybody involved and we hope that soon we would have the electronic call-up system set up at the Lekki Deep sea port soon. We are aware of not just Lekki Deep Seaport, but also Badagry Deep Sea Port and we have been engaging relevant stakeholders to make sure that we don’t have a repeat of what happened in Apapa” Okonoman noted.

However, in a chat with our correspondent last week, one of the officials of the Lekki Deep Sea Port, Mr Daniel Odibe informed that the management of the deep seaport already has a vehicle booking system where bookings for trucks will be done before gaining access into the port. He noted that the booking system will be operated by the container terminal.

Odibe further informed that all trucks will be registered alongside their drivers, adding that the trucks will have their registered identification, which an automated gate will read to allow them access into the port. He also said there are plans on ground to have a pre-gate/ staging area for trucks, before they are scheduled into the port.

In his words: “There is a vehicle booking system which is operated by the container terminal. So you can make your bookings before coming into the port. All trucks will also be registered along with their drivers and the trucks will have their RF ID which the automated gate will read to allow access into the port. The port will also have a pre-gate/ staging area for trucks basically. Those are the systems we have in place to address those challenges” Odibe concluded.

On their part, stakeholders have argued that although automation is the best way to control traffic in and out of the port, there should be adequate provision for necessary enabling infrastructure to make the electronic call-up system work at the Lekki Deep sea port.

Speaking with our correspondent, the National President of the Association of Maritime Truck Owners Association (AMATO), Chief Oluremi Ogungbemi confirmed that TTP is working on establishing a relationship that will work out the modalities of how the automation system will be effective at Lekki Deep Seaport. He also noted that the Lekki Deep seaport would be a game changer when it begins full operation adding that such a facility cannot be effectively run without automation.

Chief Ogungbemi however noted that although the E call-up system is working, there are many areas where the system is being sabotaged. He advised that TTP should work out modalities on ensuring all loopholes used to sabotage their operations are blocked to avoid people circumventing the system.

“When the Lekki deep sea port comes into full operation, it will be a great game changer and we cannot operate a facility without automation. The whole world is now becoming automated. I am aware that eto is working to ensure and establish a relationship that will work out the modality of how the automation system will be effective at Lekki Deep Seaport.

“Absolutely I support the approval of their operations at the Lekki Deep Seaport. No one should be against it because for any business to thrive in this modern day of technology, the business must be automated otherwise it will crash.

“However we have been saying that TTP should do more to make sure that all the loopholes that people are using to sabotage the operations; they should work out modalities by which they will block it to avoid people circumventing the system. No system is perfect at a go. It is when you start using it that you know where the hiccups are and you know where you do need amendments and adjustments” Ogungbemi noted.

On the contrary, the National Organizing Secretary of the Council of Maritime Transport Union and Association (COMTUA), Mr. Dike Collins kicked against the approval stating that the operations of TTP in the past years is majorly to tax truckers before they are given access to the port without providing the necessary infrastructure which according to him needs to be challenged.

Mr Dike noted that the Nigerian Port Authority (NPA) should provide the services of the electronic call-up system themselves instead of delegating it to another company that will tax and extort truckers.

“No, I do not support their approval to operate at the Lekki deep sea port. This is because what they are doing is fraud. They are collecting money illegally. They are taking a percentage from our investment without providing the necessary infrastructure. What services are they running and what is NPA doing? Have they solved the Kirikiri quagmire of collecting money illegally through POS?

“Why must I pay to access the port after doing all my necessary documents? Let’s be clear on this, we are not in support. I can say that all they have been doing in the past years is just collecting money and taxes to access the port which needs to be challenged.

“The basic thing is that the government should expand the road and NPA should provide the service of TTP and stop delegating it to another company that will charge us. Why is NPA signing contracts with a company and even fixing the price expecting us to pay? Is it logical? This is another conduit NPA is using to siphon money from truckers using divide and rule to block whatever coalition that might come up to challenge them. Why have they not mandated tankers to start using their service? It is because NPA is using divide and rule to destroy container logistic operators. As far as I can say, it is fraud and illegal. It also needs to be challenged in a court of competent jurisdiction” Dike said.