“I contested CRFFN governing council election as a transporter”

“I am not a fighter, noisemaker, or a politician”

In this interview with Shipping Position Daily, the President of National Council of Managing Directors of Licensed Customs Agents; Mr Lucky Amiwero speaks on sundry industry issues, especially as they concern freight forwarding, freight forwarders and the CRFFN. 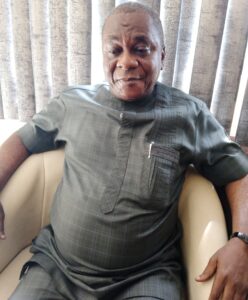 What is your appraisal of the Nigerian maritime industry so far this year?

We operate one of the most expensive ports. The port is not consistent, predictable and not transparent. This makes the port system a write-off, and cannot be used as a hub or a transshipment port. The port has lost all those factors that attract employment and wealth creation. Employment is moving to other countries like Togo, Ghana, Cote d’Ivoire and Cameroon. Within the land-locked countries, people are moving down there. We have a port that is not preferred and which has not addressed its challenges. When you look at the port, you must have a re-think before you bring consignments into the country. We are always working with our hearts in our hands.

Does that mean that we are not doing well with our ports?

We have not done anything. After the port reform, we don’t have anything that we have done. We have just lost all the reforms. When you look at the whole system, it is not working well for this country. We have a gridlock that has been there for more than 15 years.

What is your appraisal of the NPA electronic call-up of trucks?

When you look at the concession, Nigeria has no concession, our port is on lease. This is because there is no law guiding it. The only law there is the infrastructure regulatory concession. The other laws like NPA law, Shippers’ Council Law, and Ministry of Transport Law don’t have Concession components. What they use to midwife what they call concession is just a lease. What we are having is a contract without a law. There is no regulator, so the economic interest is not regulated. That means it is tilted to the advantage of the terminal operators and shipping companies. That is what we have. Such a system is a terrible system that the World Bank actually fought against.

Why should I commend NPA, have they solved the problems? The problems are not even the e-Call Up system. The problems are there and we have not addressed them. The problems can only be addressed by experts and not politicians or by e-Call Up system. The e-Call Up system is just to allow containers to go into the ports. Is that the problem of the port? The problem of the port is quite huge. We are losing our traffic to the main ports and freight components. Freight components are what attract labour and generate wealth. We have lost all that to countries like Togo, Benin Republic, Ghana etc., they took over our transit cargo. Some of our transshipments are in Cote d’Ivoire. If you look at the cargoes coming here, we don’t have a port that is well-fed. We are not a millennium port. We are not designed for that. We have the market and the cargo, but we are losing them. The question is that has the e-Call Up solved the problem?

You have been very quiet as the National President of the Council of Managing Directors. Why?

I am not quiet. It is not a question of when you fight and all the rest. I try to see how we can solve policies. I am not a fighter, noisemaker, or a politician. I am just making sure our generation who are yet unborn will benefit from our activities. That is just the truth.

Are you not worried about a parallel National Council, where someone is also claiming to be President with executive officers?

I don’t have a parallel executive. There has never been one. We have a court decision on that. People have been jailed, they have gone to prison and some of them have died.

What about the Council of Managing Directors that is accredited by the CRFFN?

No, what you have there are miscreants. When you are talking about affiliation to the Council of Regulation of Freight Forwarding in Nigeria, we took them to court. We are not members of the CRFFN. The decisions of the court have been communicated to them. Anybody that is involved in it is a criminal, because we have taken them to court. We are not freight forwarders. Freight forwarders are people who are transporters that move goods from port to port as contained under Section 30 of their law. It is very clear. For us, we are regulated by the Ministry of Finance under section 153 -155. We are authorized to operate and our job is to classify, interpret and apply the principles. We are not transporters or freight forwarders; we are licensed Customs Agents under WTO. They are transporters under FIATA and the rest. So we don’t operate with the same parameters. They can be afflicted there. Many people have been taken and they have been jailed for criminal offenses. There are court decisions to that effect; we took CRFFN to court.

No, there is nothing like Custom brokers. You are talking to an expert. Who are Customs brokers? We don’t have Custom brokers in this country. What we have is Licensed Customs Agents.

You are talking to idiots who have not contributed anything to the economy. Who are the people? I have served in 168 government committees. Tell me one person in this port industry that has served in six. You cannot. People you are talking about are people who have not served in half committee. It is Tony Nwabunike, Aniebonam, Shittu, or who?

What about the licensed customs agents who are registered by CRFFN?

They are fools. This is because, if you go and register with freight forwarders they cannot teach you what to do. What is the work of CRFFN? Tell me what they have done since 2008 up till now. They have not done a single thing.

You once contested to be on the governing council of the same CRFFN?

I contested as a transporter, not as a licensed Customs Agent. I am a transporter. When you say clearing and forwarding, what is forwarding? Forwarding is transportation. I teach, I started teaching NPA in 1996 at their AGM and Shippers Council from level 14 – 17. Go and ask them.

You claimed to know CRFFN status, and you still contested?

Read Also:  “The Mistake A Lot Of People Make Is That They Think The Solution To Piracy Is The Boats” – Rear Admiral Ombo

We have interviewed many ‘big men’ on this page, none has been this… (cuts in)

You call them ‘big men’, what have been their activities in this country? Call one name and tell me what they have done. Is it not to go there and become MD and leave? They also created the problems we are facing today at the ports. Tell me what they have done. How many committees have they served and what have they brought? I told you I have documentation of what I have done. As a man, I have not been in government and have not made changes.

This is not a classroom, it’s an interview

The interview is a classroom. If you want to fault what I have said, you can.

You are aware that the Nigeria Customs Services has acquired new scanners?

If Customs has acquired scanners, what are they doing with the ones that were there before? Those scanners have a life span that is supposed to have a pre-investment procedure for the government. In 2006, I wrote for this process of introducing scanners to the system. The government accepted it and set up a committee of which I was a member. It was done and the contract was signed. The first contract was signed in 2003. I fought against it and it was canceled because some contenders got the whole scanner job. As a result of our fight, the other people, SGS, and Globalscan were brought in. In 2006, a new contract was signed incorporating these new agencies. The scanning we have was supposed to have expired in 2012, then 2013, Customs was supposed to take over but there was an extension of six months and an additional six months. In 2014, the whole scanners collapsed and the Nigeria Customs Service took over. The problem was that a particular prospect area of the law was not actually adhered to. That area actually has a six months’ part-maintenance plan for the scanners. What that contract is saying is that every scanner that is going to be handed over to the Customs must be functional. What happened was that after the whole process, within that time, a committee was set up and that committee left the whole thing. That is why we have the moribund scanners we have today. Most of the scanners are not as old as that. Like the one at Seme came in 2013, while some are just three or four years older than that. So few of the scanners are quite modern but unfortunately, it was not properly maintained and today the whole scanners are off.